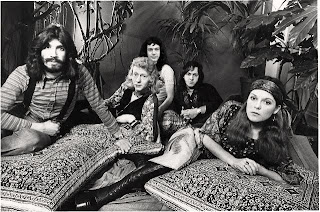 This is a compilation of Babe Ruth session material recorded for the BBC  in 1973 & 1974 and subsequently presented by legendary British radio DJ Alan Freeman as part of his weekly 'rock show' sometime after, as the material was featured as one of his 'archive sessions'.

Babe Ruth were actually banned from the BBC by producer Bernie Andrews whilst recording for the John Peel Show in 1974. Their official site does not explain why, however the ban was lifted in 1975, not that surprising when you consider the quality of their music.

The band also appeared on the BBC's Old Grey Whistle Test weekly television programme both in 1973 and 1974 however I believe this material originated from radio sessions. The band have also been on a reunion tour this year with gigs this month in Canada.

Babe Ruth are a rock music group, primarily active through the 1970s, from Hatfield, Hertfordshire, England. Their characteristically 'heavy' sound is marked by powerful vocals from Janita Haan and full arrangements by Alan Shacklock. They are acknowledged as having more commercial success in North America than in their home country.

When the group was first formed in 1971 (year in music), they were called Shacklock after their guitarist Alan Shacklock. Members included Janita Haan and Dave Hewitt, with Dave Punshon and Dick Powell later joining. The first release was their single "Elusive"; their first album, First Base, went gold in Canada. In 1973, Ed Spevock replaced Powell and Chris Holmes replaced Punshon on the second album. In 1975, Steve Gurl, keyboardist from Glenn Cornick's Wild Turkey replaced Holmes for the third album. The same year, Shacklock exited and Bernie Marsden (Wild Turkey) joined the team for the fourth album. After this, Haan and Hewitt left.

zigzagwanderer said…
Thanks for a great post,been listening to this over the past few days,I'd forgotten how good they were.
19 July 2010 at 23:40

Anonymous said…
This is wonderful, I've been listening to it alot this week. Thanks for posting - I am wondering, the download skips a bit at the beginning of Black Dog. Is this a flaw with the original? I'd love a repost without the skip.

Anonymous said…
Thanks for the new Black Dog!