Showing posts with the label Shelf Lives
Show All 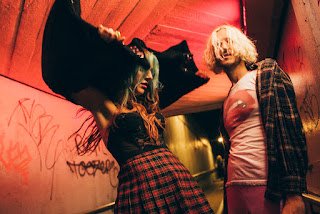 Photo - Derek Bremner Shelf Lives - Skirts & Salads. South London duo Shelf Lives return this week with new single and video "Skirts & Salads", marking a year since the release of their self-titled debut single "Shelf Life". The new single is released today alongside a typically idiosyncratic video created by Ben Pollard. "Skirts & Salads" is the first new music to be heard following their widely praised debut mini-album 'Yes, offence' - released on the band's own Not Sorry Mom Records imprint in April earlier this year. Originating from Toronto, Canada and Northampton in the UK respectively, Shelf Lives consists of vocalist Sabrina Di Giulio and guitarist/producer Jonny Hillyard – who now both reside in South London. New single "Skirts & Salads" was co-produced by the band's frequent collaborator SPACE (IDLES, Do Nothing) and was written shortly after the recording of 'Yes, offence' was wrapped, at a time
Post a Comment
Read more
More posts