Showing posts with the label Carl Broemel
Show All 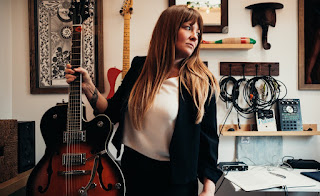 Photo - Sebastian Buzzalino Elle Celeste - Call On Me. When Elle Celeste started playing music for public consumption in her early twenties, she wanted to make the most amount of noise and be as wild as possible—screaming her head off and slapping audience members in the face as she fronted an acid rock band. She considered it a good gig, as long as she could hold a note long enough that it felt like she was going to pass out. A lot has changed since then for the resident of Calgary, Alberta. In 2014, she and her primary musical collaborator Kirill Telichev formed the band Copperhead, making self-described “21st Century folk music” that blended punk, ambient and electronic sounds with traditional elements. Over the course of making two well-received independent albums, and sharing stages with the likes of Art Bergmann, Elliott Brood, Lindi Ortega, Terra Lightfoot and The Strumbellas, Elle got exposed to the wider music world and where she envisioned her place within it. It’s led to El
Post a Comment
Read more
More posts