Showing posts with the label Fastheaven
Show All 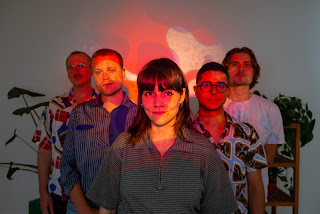 Photo - Dominik Asche Moonpools - Damaged Goods (E.P). Moonpools, the charming quintet from Basel fronted by singer Marcie Nyffeler, will release their new EP 'Damaged Goods' on August 19th via Young and Aspiring. On their sophomore release, the band combines emotional dreampop with driving indie rock reminiscent of international artists such as Cocteau Twins, Snail Mail or Soccer Mommy. Moonpools were formed in 2016 by Marcie Nyffeler (vocals/ guitar), Jasper Nyffeler (drums), and Francesco Vona (keyboard) and completed by Matthias Gusset (guitar) and David Blum (bass). The latter are known from various Basel-based projects such as Sheila She Loves You, Don't Kill The Beast, Brainchild and Mastergrief. The band released their first EP 'Turbulent Times' in 2019, which was immediately met with positive reactions: For example, the single ‘Brainbug’ was chosen as SRF Virus CH-Song of the week. After a few concerts, including support shows for Oso Oso and Prince Daddy
Post a Comment
Read more
More posts