Showing posts with the label Natalie Henry
Show All 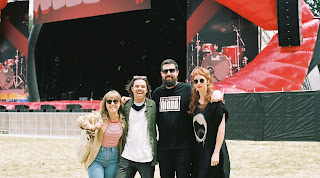 T.G. Shand - WAWO. Otautahi, New Zealand based dream pop artist, T. G. Shand is excited to present her latest single release, ‘WAWO’. Out today Friday 11 November. This is the first single off an upcoming EP due out this summer. Delving back into her heavier Melbourne shoegaze roots, this one  feels the influences of Tamaryn and Sharon Van Etten. It's heavier than the recent tracks but has a dream pop sparkle. Self produced by Annemarie, and mastered by Bevan Smith, the track is both dynamic and ethereal. "Most of it came together pretty quickly in a weekend, then I spent a month figuring out the bridge and how to include my precious Yamaha CP-70 piano." T. G. Shand came to life in 2016. “After Miniatures disbanded, it’s been an outlet for music ideas and trying out guitar and bass.” Annemarie’s shoegaze roots found influences from the likes of Curve, Chapterhouse, Medicine, and equally from modern R&B/hip-hop heroes like Pip Millet and Little Simz. T. G. Shand · T.
Post a Comment
Read more
More posts