Showing posts with the label Verra Cruz
Show All 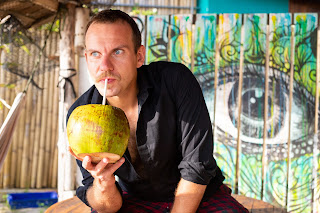 Erik & the Worldly Savages - Burn My Life. Erik Mut is a man on a mission, having broken the shackles of Western society and trailblazed his own path of rebellion, adventure, leadership and musical passion. His powerful Folk Punk project Erik & the Worldly Savages musically and lyrically reflects his manifest philosophy of seeking personal freedom, cutting ties with the past, reprogramming your mind and embracing life wholeheartedly. An expat since 2008, Erik left his home in Toronto, Canada at the age of 25 to let the cultures of the world wash over him, inspiring his life, work and music. Erik & the Worldly Savages formed in 2008 while Erik was in Belgrade, Serbia. While based in London and Belgrade, the band played over 250 shows across Europe with lineups of musicians from many countries. In 2016 he started Support Adventure, a company which gives remote jobs to expats and digital nomads, now with more than 160 staff members living in over 20 different countries, creat
Post a Comment
Read more
More posts