Showing posts with the label Shira
Show All 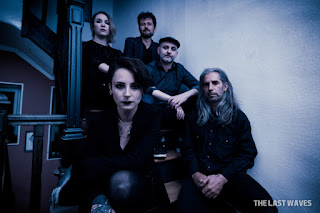 The Last Waves - under a black sun (E.P). A couple of months after the release of 'dark is the path', French cold-wave/post-punk/dark-pop/indie-rock five-piece The Last Waves just released another EP called 'under a black sun'. These five new songs lead us immediately to worry, anguish, loneliness. New uninhabitable space, he shares with us his distress and his despair. The music of The last Waves offers us the sound image of an inaccessible world, it convinces us of its reality. 'under a black sun' was recorded, mixed by the band and mastered by Benjamin Joubert at the Biduloscope studio in Paris. The Last Waves is a new band created in the middle of the pandemic around three boys and two girls. The name of the band is a wink to the new wave of the eighties, the famous new-wave whose name was borrowed from the new wave of the French cinema of the 50's and 60's and carried notably by the British Joy Division, New Order, Depeche Mode or Simple Minds. Con
Post a Comment
Read more
More posts