Showing posts with the label Gillie
Show All 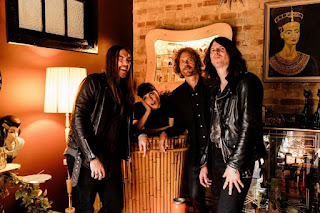 Photo - Catherine Harder Sohodolls - Bad. London's influential electro-rockers Sohodolls are back! After being out of the limelight for more than a decade, a globally enforced lockdown revived one of their classics ‘Bang Bang Bang Bang’ into an unexpected viral TikTok hit among the Gen Z glitterati, which has inspired the band to reform and release some stunning new music. Following last month’s unveiling of new track ‘Letter To My Ex (Thank You, Goodbye)’, new single ‘Bad’ sees Maya Von Doll giving advice to her younger self on rebelling against gender specific advice: “I regret not trusting my instinct to stand up for myself. So, this song is about understanding and accepting that fight instinct. About standing up for yourself and rejecting advice that I think is mostly given to young women in my line of work. You shouldn’t always act on it, but you shouldn’t deny its existence. We are all animals - females included!”, she further explains. ‘I can be good and sometimes clever, b
Post a Comment
Read more
More posts