Showing posts with the label Life In Mono
Show All 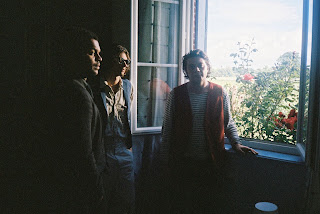 Sunglasses For Jaws - For Another Day. London based outfit Sunglasses For Jaws have released their new single "For Another Day" alongside a video directed by Andrea Banjanin. The new single is the second track be released from Sunglasses For Jaws' upcoming album 'A Room In Europe' - out 16th February 2023 via Pony Recordings. Combining a love of Scott Walker, Somalian 70’s funk, Hollywood strings with a dash of Portishead, new album 'A Room In Europe' was produced by the band in their East London studio, mixed and mastered by Elliot Heinrich  (Sorry, Parquet Courts, Deadletter). New single "For Another Day" stems from an acoustic guitar piece the band had previously written - inspired by Bach’s use of a sustained bass-line staying in one place while a melody plays alongside it. This initial idea grew in the studio with the addition of synth chord triggers and a wonderful string arrangement composed by Clementine Brown. Elevating the song to a mo
Post a Comment
Read more
More posts