The Move - Sounds Of The BBC 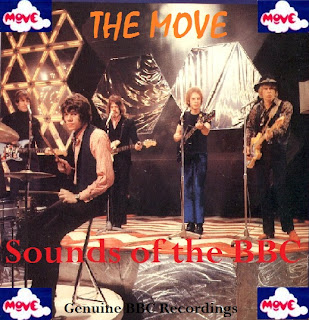 This is The Move with a mixture of BBC sessions music recorded from 1967 to 1970. Not to be confused with the official 1998 release (The Move - The BBC Sessions - Strange Fruit UK records), this material is different and in fairness of lower quality.

Whilst we do not know for certain, the probabilty is a good portion of this BBC material was recorded 'off air' from BBC Radio One, that at the time was on AM. Some clearly is studio master, and even the 'AM' element conjours up memories of listening to 1960's 'medium wave' radio stations.

It is therefore reasonable to speculate that the originals of this material never made it to BBC transcription disc, or the record label had more than enough material for the 1998 (single CD) album release.

Whatever the case this remains another fine 'time capsule' from one of Englands finest and most consistent bands of the 1960's.

The Move, from Birmingham, England, were one of the leading British rock bands of the 1960s. They scored nine Top 20 UK singles in five years, but were among the most popular British bands not to find any success in the United States.

Although bassist-vocalist Chris "Ace" Kefford was the original leader, for most of their career The Move was led by guitarist, singer and songwriter Roy Wood. He composed all the group's UK singles and, from 1968, also sang lead vocals on many songs, although Carl Wayne was the main lead singer up to 1970.

The group evolved from several mid 1960s Birmingham based groups, including Carl Wayne and the Vikings, the Nightriders and the Mayfair Set. The group's name referred to the move various members of these bands made to form the group. Beside Wood, the original five-piece line-up of The Move in 1965 was drummer Bev Bevan, bassist Kefford, vocalist Carl Wayne and guitarist Trevor Burton. The final line-up of 1972 was the trio of Wood, Bevan and Jeff Lynne, who transitioned the group into the Electric Light Orchestra.