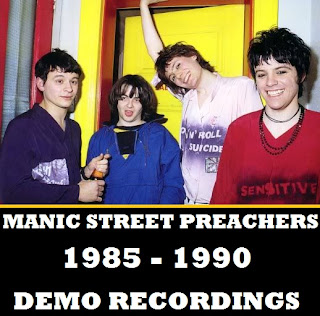 This is a collection of demo recordings from the Manic Street Preachers, recorded between 1985 and 1990 (it is more likely that the earliest material was actually recorded in 1986). A reasonable amount of this was probably recorded before Richey Edwards became a member of the band. An early version of their debut single (plus B side is included). Of the rest some made it on to B sides of single releases, some would eventually morph into tracks for the first album and some remained just as demos.

From Wikipedia regarding the early days of the Manics - The band was formed in 1986 in Oakdale Comprehensive School, Blackwood, south Wales. During this time, Bradfield had tried writing lyrics, but this later changed and Wire wrote all their earliest lyrics, leaving Bradfield, alongside the classically-trained Sean Moore when he joined, to write the music. Original bassist Flicker (Miles Woodward) left the band in early 1988, reportedly because he believed that the band were moving away from their punk roots. The band continued as a three-piece, with Wire switching from guitar to bass, and in 1989 they recorded their first single, "Suicide Alley". Edwards joined the band on guitar and often made contributions to lyrics with Wire, designing record sleeves and other artwork, and driving the band to and from gigs.

In 1990, they signed a deal with label Damaged Goods Records for one EP. The four-track New Art Riot attracted as much media interest for its attacks on fellow musicians as for the actual music. With the help of Hall or Nothing management, the Manics signed to indie label Heavenly Records. The band recorded their first single for the label, entitled "Motown Junk".

The band released their next single, entitled You Love Us, and again displayed a huge cultural scope. The single sampled Penderecki's "Threnody to the Victims of Hiroshima" as well as Iggy Pop. The video featured Nicky Wire in drag as Marilyn Monroe and contained visual references to Betty Blue and Aleister Crowley. In a now legendary interview with then NME journalist Steve Lamacq, Edwards carved the phrase "4REAL" into his arm with a razor blade to prove their sincerity. He was taken to hospital and received a total of seventeen stitches. Columbia Records of Sony Music UK signed the band shortly afterwards and they began work on their debut album.