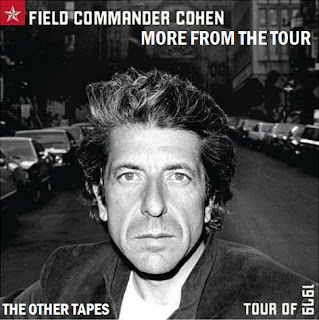 The officially released album 'Field Commander Cohen - Tour of 1979' is a live album by Leonard Cohen released in 2001. Songs were recorded live at the Hammersmith Odeon, London, on 4th, 5th, and December 6th, 1979 and at the Dome Theatre, Brighton, on December 15th, 1979. Leonard Cohen said it was his best tour ever. Accompanying Leonard Cohen was the jazz band Passenger from Austin, Texas, see line up details below.

These additional recordings include six songs from the Brighton Dome Concert Hall, (Brighton, England 15th December 1979) that were not on the official release including a stunning version of 'Silent Night'.

The Birmingham concert has circulated as a bootleg in it's own right. The sound leveling and editing on a couple of songs suggests this was a soundboard tape that was not part of the material recorded for the live album, that said this is a wonderful concert and the overall audio is fantastic.

From Wikipedia regarding this era - In 1979, Leonard Cohen returned with the more traditional Recent Songs, which blended his acoustic style with jazz and Oriental and Mediterranean influences. Beginning with this record, praised in 2001 by Cohen as his favourite, Cohen began to co-produce his albums. Produced by Cohen and Henry Lewy (Joni Mitchell's sound engineer), Recent Songs included performances by Austin-based jazz-fusion band Passenger whom were introduced to Cohen by Mitchell. The band helped Cohen create a new sound by featuring instruments like the oud, the Gypsy violin and the mandolin. The album was supported by Cohen's major tour with the new band, and Jennifer Warnes and Sharon Robinson on the backing vocals, in Europe in late 1979, and again in Australia, Israel and Europe in 1980. The tour was filmed by Harry Rasky as The Song of Leonard Cohen, and the film was broadcast on television in 1980. Cohen also gave couple of major TV appearances in 1979, including German's ZDF television. In 2000 Columbia released an album of live recordings of songs from the 1979 tour, entitled Field Commander Cohen: Tour of 1979; the album (with different track list) was originally rejected by the label in 1980.

Anonymous said…
This is marvelous.