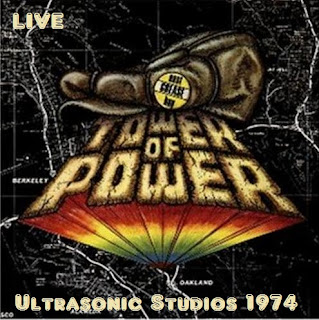 Reloaded 23/May/2015 - Beehive Candy may at times feel, less a labour of love and more a chore, when it comes to replacing our many lost files. However when we are reminded of fantastic performances such as this one and the musical diversity it adds to this site, it does make the whole replacement thing, seem a far more worthwhile project.

A fine and funky concert complete with the full power house of rhythm is captured here on this recording of Tower Of Power and fit for 'Bumpsters' everywhere!

Recorded with an appreciative audience at Ultrasonic Studios Hempstead, NY, USA back on May 14th, 1974 this is a superb example of the band who continue to impress and perform today.

Some background from Wikipedia here that covers up to the time of this concert - The roots of the band go back to the summer of 1968, when tenor saxophonist/vocalist Emilio Castillo met Stephen "Doc" Kupka, who played baritone sax. Castillo had played in several bands, but it was Castillo's father, who told his son to "hire that guy" after a home audition. Together, they would become the backbone of Tower of Power. Within months, the group, known as the Motowns at the time, would begin playing various "gigs" around Oakland and Berkeley, their soul sound relating to both minority and rebellious listeners.

Augmented by percussionist/conga/bongo player Brent Byars, guitarist Bruce Conte and keyboardist Chester Thompson, Tower of Power moved to Warner Bros. Records. With Rick Stevens now singing lead, 1972's Bump City would give the band its first national exposure. This album included "You're Still a Young Man", which peaked at number 29 on the Billboard Hot 100. Emilio Castillo, who co-wrote and sang lead on "You're Still a Young Man," told Songfacts that the song was based on a true story concerning a former girlfriend who was six years older than him. Though not released as a single, "Down to the Nightclub" received heavy airplay on West Coast FM stations and several AM stations. Both songs still get substantial airplay on oldies radio and remain fan favorites.

Tower of Power, released in the spring of 1973, the third album for the band, now featured Lenny Williams on lead vocals and Lenny Pickett on first saxophone. This was the group's most successful album. It peaked at number 15 on the Billboard Pop Albums chart and was RIAA certified as a gold record (for sales in excess of 500,000 copies). The album also spawned their most-successful single "So Very Hard To Go". Although the single peaked at number 17 on the Billboard Hot 100, it landed in the Top 10 on the surveys of many West Coast Top 40 radio stations, hitting number 1 on many of them. The album also charted two other singles on the Billboard Hot 100, "This Time It's Real" and "What Is Hip?" The latter is possibly their most enduring song.

1974's Back to Oakland spawned another hit, "Don't Change Horses (in the Middle of a Stream)", that reached number 26 on the Billboard Hot 100, plus "Time Will Tell", which charted at number 69.