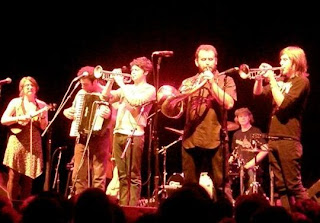 This is Beirut  recorded live back on  March 16th  2007.  This was at the  KLRU studios in the  communication building on the University of Texas campus, on the  Austin City Limits Stage, (where they produce the TV show). The actual recording was from KEXP Seattle who re-broadcast the concert. Beirut is an American band that was originally the solo musical project of Santa Fe native Zachary Francis Condon, and later expanded into a band. The band's first performances were in New York, in May 2006, to support the release of their debut album, Gulag Orkestar. Beirut's music combines elements of indie-rock and world music.  Wikipedia tells us - On his return from Europe,  Zachary  Condon enrolled at the University of New Mexico, where he studied Portuguese and photography. Condon recorded the bulk of the material used for Gulag Orkestar by himself in his bedroom, going into the studio to finish the album with the assistance of Jeremy Barnes (Neutral Milk Hotel, A Hawk and a
3 comments
Read more
More posts