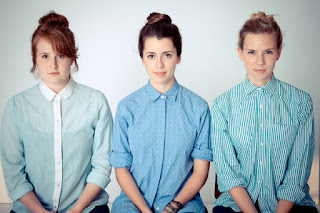 'Love Song' was written during a muggy summer in a half furnished room at their first apartment in Brooklyn and speaks to a younger view of love and wanting. The kind of song you might need after a solid weekend of drinking and falling in and out of love with strangers and exes or after reading a Hemingway book, lying in your hammock in the heat of summer.

Ember Isles is a trinity of modern folk writers, lyricists, and instrumentalists. Their yearning vocals and raw lullabies scratch at the ribs and burn the throat like scotch whisky. With personal origins stretching from Scotland to California, and back over the grey Atlantic waters to England, The Isles evoke the foggy dawn seashore and the warm cup of tea you would crave after a forlorn walk down the coast.

Whether on a ukulele, fiddle, or electric guitar, this trio yields a soundscape of resilience and fragility that illustrates the smouldering hearts of these three women. Hannah Read, Tamsin Wilson, and Megan Lui are currently based in Brooklyn, New York.

This is a soothing gentle song that gradually unfolds with a mixture of exquisite vocals over a haunting soundtrack. Just right for a hot summer evening (or a cold winters morning if you prefer).

Yuck - Background - are back with a new track and a handful of US shows this August.  The band is currently wrapping up work on their third album, which will be out in early 2016 - "Hold Me Closer" is our first taste of it.

Yuck's new album has been recorded and produced entirely by the band in their London studio. Their new songs are wild and compact, centred and expansive, forward-thinking and referential. They are the output of a band that loves being a band, loves playing music, and loves touring the world over and over and over again. They're songs that, in short, are exactly the songs that a great band like Yuck should be making.

Now if you prefer your music with a little more kick, Yuck are well placed to deliver. Fuzzy wall of noise vocals, with a tight, no nonsense band, that plays with power and attitude and style.