Background - Common Tongues have taken a step in a new direction with their upcoming debut album; with their sound extending towards the experimental, by its presence of electronic instrumentation and powerful song progressions. A new life is given to their powerful indie-folk music.

Dancing on the boundary between acoustic and synthetic, Common Tongues  use intricate harmonies, searing violins & bubbling electronics to create absorbing live experiences and records that reveal immersive arrangements and lyrical themes of conflict, decline and rebirth.

Their newest single ‘Pioneer’ from their upcoming debut album 'Divisions', is their gutsiest release yet. Delving into the tradition of intimate singer-songwriting with deeply personal lyrics, Pioneer also reveals a different personality of underlying electronic swells and arpeggios matched by ornate guitar licks. The band explain more about their upcoming album “With Divisions it felt like we suddenly had a group of songs with a rawer, more insistent new edge to them, threading them together. I would say the sound of the record stems from us exploring the sounds we love in music and the world around us and trying to find a way of expressing them in our own way.”

Their debut record ‘Divisions’ was recorded with producer Gavin Monaghan (Robert Plant, Kings of Leon, Paulo Nutini, The Editors). It sees the band growing out of their folk roots by experimenting with sound and rhythm whilst keeping the honest poetry of their lyrics and journey-like structures. Facebook here.

The new track 'Pioneer' suggests the bands shift from indie-folk into more experimental and adventurous territories, is quite genuine. It certainly feels that way with this rich and vibrant song, where the vocals are determined and invigorating, and the musical arrangement is expansive. Makes the debut album, all the more intriguing and easily anticipated. 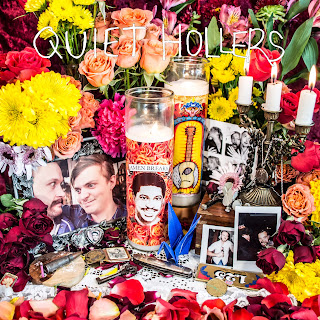 Background -  “Funny Ways” , the excellent new single from Louisville’s revered indie/post-punk group Quiet Hollers. “Funny Ways” is the second official single released from their forthcoming album Amen Breaks, and the song is about criminality and the self-perpetuating prison-industrial complex.

Have you ever had a friend that just can't seem to stay out of trouble? That's exactly who frontman Shadwick Wilde wrote this song for.

The bands' new album Amen Breaks draws parallels with the cultural crossovers and the anxieties of the 1970's, a decade marred by division, political corruption, and terrorism. Website here, Facebook here.

'Funny Ways' is pretty gentle for a band described as indie/post punk.Whatever, this is a catchy song that is both melodic and superbly arranged, in fact there is a certain irony that a subject matter this deep, is delivered with such beauty. 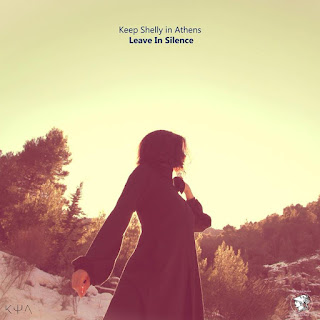 Background - Keep Shelly In Athens announces new album, Philokalia, & shares first single, "Leave In Silence". The ethereal and swirling sounds of the ambient-influenced pop of Greece's Keep Shelly in Athens captures the transient feelings of city life and the inevitable passing of time. With lush melodic beats and dreamy vocals Keep Shelly's production is an accessible and lighthearted entry into the world of down-tempo electronica.

Their third LP is coming out on September 29 2017 via their own record label Athenian Aura Recordings with the Aussie award-winning novelist/poet Jessica Bell as their new singer. Website here, Facebook here.

Keep Shelly in Athens are a creative band, as 'Leave In Silence' I hope confirms for any listeners new to their music. The arrival of Jessica Bell as the new vocalist, adds to my anticipation and impatient desire to hear the rest of album!