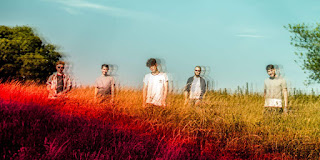 FAERS - Last Of Our Kind.

Background - FAERS’ latest single ‘Last Of Our Kind’ is a rousing reflection on the state of modern guitar music, an allegorical love story, and a clear nod to their childhood heroes The Maccabees. Written during a songwriting retreat to the welsh countryside, and recorded in Gothenburg with producer Anders Lagersford, ‘Last Of Our Kind’ is a shimmering example of the bold and brazen songwriting that inspires youngsters to pick up guitars and form bands in the first place. Steven Anderson-Howard’s rich vocals are bolstered by intensely atmospheric and colourful production as the song effortlessly mounts to a heady climax. ‘Last Of Our Kind’ is the sort of song that leaves a lasting impression in the hearts, minds, and ears of listeners long after it’s finished. It’s a clear and powerful indicator that there’s still life left in that old dog we call rock and roll.

FAERS’ singer Steven Anderson-Howard met his future bandmates at his popular weekly indie night Club Yuck in Uxbridge in early 2015. Named after his label, the event showcases groups he’s signed alongside guest DJ slots from established bands. A bond quickly formed between the London five-piece and they released their debut EP ‘Waves’ in October that year. Before long they were selling out shows in London and Brighton and netting support slots with Jaws, Native People and The Cribs. Having sold out Barfly, The Borderline, and single launches at The Water Rats and The Lexington, alongside appearances at the Y Not, Penn and Camden Rocks festivals, FAERS are rapidly growing a loyal fanbase thanks to their intriguing melange of afrobeat and psychedelic indie.

Staunch radio support has come from John Kennedy at Radio X and Gary Crowley on BBC Introducing. Throughout the coming year FAERS’ fanbase will undoubtedly grow. Their raw, visceral sound and effortless songwriting is channelled through their electrifying chemistry when they perform together. With a host of new material that will showcase new frontiers for the group, FAERS may well prove to be one of the most vital acts in the capital, and by extension, the nation. Facebook here.

FAERS serve up some refined alt rock with the new song 'Last Of Our Kind'. Energised and passionate both musically & vocally, this is a notable song. 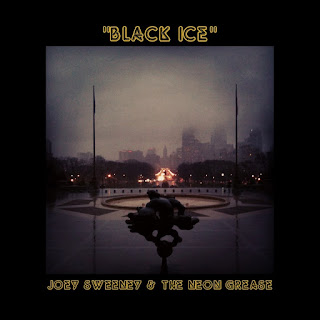 Background -  “Black Ice” is the second new single from Joey Sweeney & The Neon Grease’s forthcoming project. Joey Sweeney is a long-established fixture of the Philadelphia songwriting scene dating back to the early 90’s, having previously fronted the influential Philly bands The Trouble With Sweeney and The Barnabys. “Black Ice” follows their rollicking debut lead single “Baptized In Vibe”, and is one of the first songs Sweeney wrote for the new project after taking an extended hiatus from performing and songwriting after the dissolution of his previous projects.

“Black Ice" feels like a narrative or storytelling song about the tropes of the latent menace of the suburbs, and features spooky 12-string guitar, vaguely influenced by goth mystery love songs from the late 1980s — stuff like "Under The Milky Way" by the Church or "All In My Mind" by Love & Rockets. It also features back-up vocals from Renée LoBue, the singer from Elk City, who Joey met when back in his Trouble With Sweeney days.

Sweeney's new songs draw inspiration from sources as disparate as 1970s Philly nightlife folklore and Denis Johnson’s The Incognito Lounge. In their new songs, chiming guitars, classic rock sax solos and rainy bedroom Velvet Underground listening sessions all blend together. In these songs are little stories of triumph over dirty circumstance and grace under pressure, with the friendship of an urban family “street band” woven throughout. His songs and records have received widespread critical acclaim. A jack of all literary trades, he's also the publisher of Philly-centric blog Philebrity, co-curator of the literary fest The 215 Festival, and a creative director at Quaker City Mercantile. Facebook here.

'Black Ice' is a hook filled rocker where the musical arrangement is striking and the vocals flow smoothly above adding to the melodic feel. 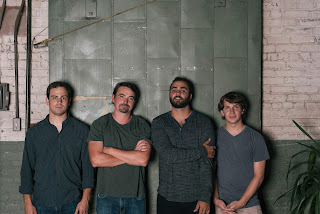 Background - On September 22, Ridgewood, NJ's Prawn will release their new album entitled Run via Topshelf Records. Prawn’s magnetism has always come from the textures they produce. Drawing as much influence from post-rock and punk as the emo world they’re often written in to, the Ridgewood quartet have released two full-length albums, two EPs, and three splits since their 2008 formation - and make their return this year with a new record, Run, which is released this September on Topshelf Records.

Recorded in the space of just two weeks this March at The Barber Shop Studios, a lake-front old stone church in Lake Hopatcong, New Jersey, but written over the course of two painstaking years, the new album sees the band expand upon those aforementioned influences, carving out a dark but wildly immediate collection of songs that sits as their most formidable work to-date.

“A lot of what came out was the sheer difficulty of truly relating to one another,” Tony Clark says of the records thematic poise. “I felt like everywhere I looked at relationships in my life, there was some feelings of alienation and isolation. I tried to go further than my personal relationships and analyze how I was relating to ideas or communities I partake in.”

A significant release on its own terms, let alone as a building block to wherever this band might take themselves, Run is the sound of a band truly finding comfort in their surroundings and channelling it in to the most focused and exhilarating work of their life. Live Dates are over on Beehive Candy's tour news page, Facebook here.

The gentle intro on 'North Lynx' soon explodes into some fine alt rock music, the vocals have some fine rock'n'roll edge to them and a funky bass line adds a little more muscle to the track. 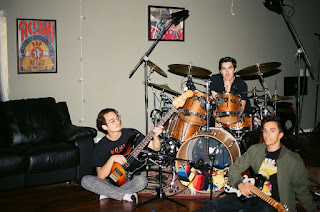 Background - SoCal garage psych trio Lunar Hand exhibit a musical maturity that belies their young age, exhibiting the same kind of smart and streamlined chops that pulled other high school bands like Arctic Monkeys from the depths of obscurity to international awareness.

Band spearhead Junior Reed began writing original songs at age 15, an endeavor which synchronistically coincided with his father’s first foray into recording music. “He had just set up some recording gear so it was good timing” Junior asserts, referring to his dad’s Northern San Diego-based studio. “I’d give him material and he was eager to record and experiment with it.” Around the same time Junior and his father began hashing things out in the lab, the young songwriter found kindred musical spirits in bassist Derulo Boulet and drummer Christian Ruth, whom he connected with in his high school jazz band. They quickly formed the rock trio Voltage Control and began playing out, exciting the local scene with their streamlined blend of amped up rock with vintage pop appeal.

After extensively touring the West Coast, the band returned to the studio to officially record their debut. Things had shifted, influences had expanded, and while they remained a tight musical unit with a cohesive vision, Junior felt a new name was in order - one that properly represented the sound they had carved out on the road and reflected the more melodic psych elements they had touched on. Now operating under the banner of Lunar Hand, the trio is gearing up to release their new EP, Magic Hour, is due out September 15th on Desert Coast Records. Website here.

Some potent riffs open up 'Smoke and Chandeliers', a thunderous psych rocker that's packs that extra layer of energy that rock trio's are more capable of offering up. 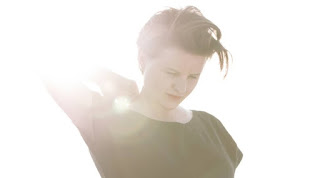 Me for Queen - Jessica.

Background - Critically-acclaimed soul-folk artist Me for Queen (aka Mary Erskine) will release her new single ‘Jessica’ on August 19th. This is the first song Mary has written and recorded on the guitar. It is “a vulnerable song about vulnerability” as well as a reflection on the role of art and that of the artist. The intricacy and elegance of Me For Queen’s songwriting and delivery has prompted comparisons to Regina Spektor, Alessi’s Ark and Carole King, with a slight touch of Kate Bush and Laura J Martin.

Mary has already garnered support from prolific songwriter Gretchen Peters, as well as Tom Robinson at BBC Radio 6 Music. The Edinburgh Metro described her as “blessed with a profound skill in the art of songwriting”, and she was also featured in The Guardian in 2014, who highlighted her “beautiful, soaring vocals”.

Years of classical training together with a Blues guitarist for a father make for an interesting mix of Soul and Folk. While Me For Queen’s piano-based songs inevitably draw obvious comparisons to Regina Spektor and Laura Marling, Mary cites Judee Sill & This is the Kit as a few of her favourites and says Me For Queen is “a sort of sketchpad for whatever’s happening in my head. I just try to write songs that talk to people.”

Her last single, Slow Train, from her EP “Who I Am and What I’m For” (released in February) was included in Tom Robinson’s personal top 5 Fresh Faves on BBC6’s Fresh on the Net and was also single of the week on the Janice Forsyth BBC Scotland Culture show.

This August will see Mary head out on tour for the 4th time in one year. Having supported Lewis & Leigh and Bryde on their respective UK tours, she is looking forward to her first headline tour, which will also include some co-headline dates with Emily Maguire. Live Dates are over on Beehive Candy's tour news page, website here, Facebook here.

'Jessica' is a beautiful, personal & intimate song, that's wrapped in a delightfully breezy acoustic arrangement. Instantly captivating, no wonder the attention Me for Queen is starting to gain. 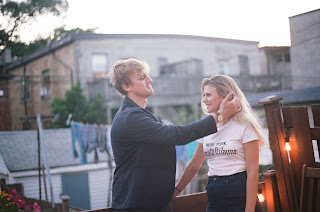 Background from the duo - Freedom Baby is a boyfriend-girlfriend duo. We met at a local show that we both performed at back in 2013. We fell in love with each other's record collections and then with each other. In 2016 we decided to try making records together.

It was after a while of experimenting with electronic sounds and orchestral elements we came up with “Video Daydream”. We arranged the song with a Snakes & Ladder game board as our blueprint. Each melody and instrument snakes and climbs from one place to another and each time you play something new is going to reveal itself.

We recorded “Video Daydream” in the spring of 2017 in Eric’s apartment along with a handful of other songs (which will be released early fall on our debut EP). The combination of Brianna’s voice paired with Eric’s arrangements creates a dreamy and melancholic experience. Facebook here.