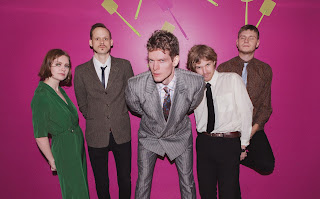 Cat Princess - Fly on Your Wall.

Background - Having formed at a New Year’s Eve party and debuted live days later, it’s fair to say Swedish quintet Cat Princess don’t conform to the usual status quo, and in new retro banger Fly On Your Wall (released this week via Rama Lama Records), their combination of modern indie pop and 80’s inspired art-pop really backs up that theory.

Providing a fine representation of the band’s live intensity and their uniquely flavoured sound, the band’s new release spotlights frontman Nils Krång's thrilling and almost psychotic vocals alongside their fusion of influences and shows exactly why they’ve already shared bills with acts including Cloud Nothings, Pale Honey and Magic Potion.

If that’s not enough, the single is accompanied with an eye-catching stop motion hand-drawn video made by bassist Isabelle Friberg which besides the band and friends features characters like Newman from Seinfield.

Discussing the release, drummer Victor Klint states: “It’s our most straightforward song yet and probably the catchiest stalker-song since Every Breath You Take”. FACEBOOK.

'Fly on Your Wall' is just a little off the wall, if you get my point, which only serves to enrich the song even further. Art pop, retro style and all wrapped up in a modern twist, this is catchy, very catchy. 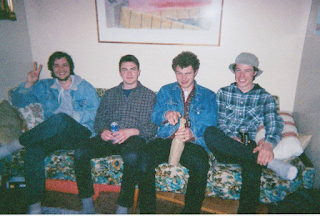 Background - The Crowleys are comprised of four musicians from Hamilton, ON, who met in high school and bonded over music. When they are not jamming, the boys enjoy looking for an Old Milwaukee Ice sponsorship, playing D&D in the van between gigs, and writing love songs.

The band's thoughts on the song: Pink Rainbows is the first song that we have recorded that we never played as a full band prior to hitting the studio. Cohen wrote the song a while back and recorded a few of the parts, and then the rest of the band kind of wrote and recorded on the fly. It gave a lot of creative freedom and we believe it shows in the final product.

The song comes from their new EP 'Colours Change Their Tone' out Feb 9th. FACEBOOK.

Any band that can go into the studio with a part developed song & use their imagination and improvisation to complete the piece, should be very proud of 'Pink Rainbows' as the finished product!