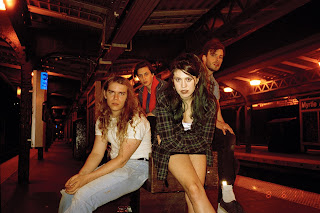 The band previously shared a taste of the EP with lead single "Doggie Door," and late last week they released "Dirty Feet," a song about finding yourself and holding on to who you are in a sea of faces.

Written during 3am subway rides and perfected in sweaty Brooklyn basements, Feed Me is full of clever lyrics, anthemic choruses, and catchy group vocals. It was produced, engineered, and mixed by Jack Counce at Studio G and is currently available for pre-order on Bandcamp.

Latest song 'Dirty Feet' from the soon to be released debut EP is accompanied by the first single 'Doggie Door' providing a double helping of QWAM and their uncompromising punk fuelled music. The band are smart and allow just enough melody to ensure the hooks keep on rolling through both songs, without compromising their delicious, exuberant energy. 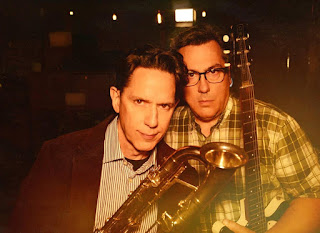 Background - With new track ‘All Time What’ from new album ‘I Like Fun’ out on streaming services now, the return of their Dial-A-Song service, a world tour including UK dates kicking off on January 17 and a contest to create a video for their track ‘I Left My Body’ underway, it is an exciting time for legendary alt-rock veterans, They Might Be Giants.

‘All Time What’ is an upbeat fuzzy guitar number about a decidedly un-upbeat subject: the falling apart of a romantic relationship. The album is a remarkable 15-track album, available physically and digitally on January 19, 2018. ‘I Like Fun’ jumps with surprises, vitality, and the startling point of view of these Brooklyn originals.

Songwriters and band founders John Linnell and John Flansburgh have drawn on themes of dread, death, and disappointment and set them to their driving, hyper-melodic music. Fresh and sonically adventurous, the band’s command of the studio and the song is in rare form from beginning to end. WEBSITE, FACEBOOK.

We featured the song 'I Left My Body' back in October and with a band of this calibre, sharing the newly available 'All Time What' was to use the old expression "A No Brainer." It's catchy, vibrant and typically They Might Be Giants, through and through! 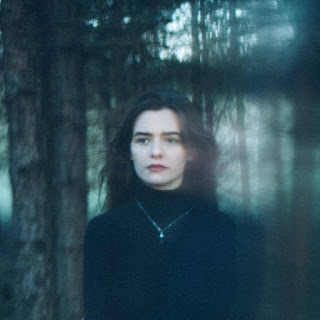 Background - Rosie Carney’s heart-wrenchingly beautiful new cover of Cigarettes After Sex’s stand-out single “K.” which has just had an official release through Akira Records. Rosie's coming off a massive 2017, which saw the release of a trio of acclaimed singles, all of which are streaming via Spotify and SoundCloud.

Anyone that’s not already acquainted with Rosie’s mature-beyond-her-years songwriting would be forgiven for thinking she was some long lost contemporary of Joni Mitchell with decades worth of experiences to relate about life, love and adversity, and not a brilliant newcomer who’s barely left her teenage years behind. She writes the kind of music that'll stop you dead in your tracks, and has proven a deft hand at creating sublime tonal flourishes to complement her vivid lyrics and enchanting voice.

Of her decision to cover "K" she says “I wanted to record a song that was released by one of my favorite artists this year. I chose ‘K’ by Cigarettes After Sex because, firstly I’m a huge fan of this band and their music and aesthetic, and secondly because this song definitely resonated with me the most from their new record. It’s such an honest song and I just love the message it carries. I love how relaxing and transcending the melody is. It’s one of those songs that I wish were mine.” FACEBOOK.

If you include a recent duet then 'K' is the sixth feature we have carried for Rosie Carney, the artist that just keeps on giving beautiful musical renditions, be it her own compositions or gorgeous covers such as this.