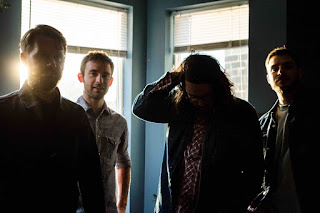 Background - “Same To Me” is the brand-new second single that Philadelphia’s indie rock band Oldermost ahead of the release of their new album How Could You Ever Be The Same? that AntiFragile Music is releasing on Friday, July 13th, following its rollicking lead single "The Danger of Belief”. The introspective song was one of the first written for their new album, and is one of its gorgeous, hazy stand-outs. It’s also frontman Bradford Bucknum’s thesis about love, and how embracing change is a liberating act that permits deeper possibilities of loving someone and loving one’s self. It also highlights the bands’ penchant for creating era-blending Americana-infused rock & roll with a more indie rock vibe in the vein of The War On Drugs (their Philly contemporaries!) or Wilco.

How Could You Ever Be The Same? includes two songs that Oldermost previously released but felt like had a home on the new album, including the undeniable track “Honey With Tea”, and the similarly lush “Finally Unsure”. How Could You Ever Be The Same? also spotlights the bands' evolution into more complex sonic territory, on the heels of the momentum built from the band’s previous releases. Self-produced by the band and mixed by Jeff Zeigler (Kurt Vile, The War on Drugs, Allison Crutchfield) and mastered by Ryan Schwabe (The Districts, Big Thief, Hop Along), the album is an all-star Philadelphia collaboration in the truest sense.

How Could You Ever Be The Same? also highlights the paradoxical blend of neuroticism and mysticism of lead-singer Bradford Bucknum, whose vocal delivery oscillates between semi-theatrical energetic bursts to gentle, sugary crooning. At times, despairing wit and questionable advice buoyantly tumble over a sea of lush strings; at other times, the songs dig their heels in the genre and the classic-rock enthusiasm of Mike Sobel’s guitar, the steady but experimental rhythms of Stephen Robbins’ focused and passionate drumming and Dan Wolgemuth’s unique and melodic bass playing. The music is both familiar, yet fresh - it hints at nostalgia without stumbling into kitsch. At some moments the music sounds urbane, almost high-brow and literary, and at others times, it's wild and unrefined. WEBSITE.

It was back in August 2016 that we first came across Oldermost and for whatever reason we lost track of them pretty much straightaway. It says something for the band that I knew we had featured them before, and so now we can pick things up again with 'Same To Me' their brand new single. It's a cool and calm rocker that drifts towards Americana and is enriched by some gorgeous vocals and melodic hooks. 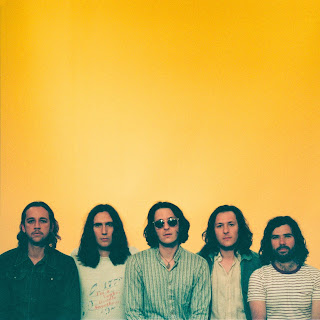 Tempesst - A Little Bit Of Trouble.

Background - Tempesst announce the release of their second EP Doomsday - along with the release of new single ‘A Little Bit Of Trouble'. Detailing an ill-fated encounter with some less than courteous Londoners - the new single signals an exciting step up for the Australian, Sunshine Coast born 5-piece. Speaking a little more on the lyrical beginnings of the song, Toma Banjanin said: “The week we started writing the instrumentals for the track we had a bit of an incident at a pub in east London. Some guys were giving Andy (Toma’s brother, and Tempesst drummer) a hard time about his jacket or hat or something and everyone was pretty drunk. The song was written to capture the memory for eternity."

Following the band’s acclaimed, Adult Wonderland EP - both ‘A Little Bit Of Trouble’, and the band’s forthcoming second EP 'Doomsday' stand as impressive steps forward for the band. Sonically they continue to evolve, experimenting with more instruments, layers and sounds; maintaining their classic 60s / 70s influence but, still giving a very welcoming nod to modern psych, folk, and indie.

"I swear to god they are looking at me again / A little bit of trouble at the end of the line" Toma sings in A Little Bit Of Trouble's stomping verse, suggesting a sense of paranoia, or perhaps remorse for a familiar, reoccurring situation. Set to a backdrop of sun-kissed guitar licks and sumptuous string arrangements - 'A Little Bit Of Trouble' is arguably Tempesst strongest and most potent release to date. Closing the song declaring "I'm leaving all my bad behaviour behind" - Toma is on defiant mission to better himself - no matter who or what might stand in his way.

The forthcoming EP, 'Doomsday' touches on a sense of morality within the band, with Toma explaining "I have been caught in a ‘meaning of life’ spiral which I guess is pretty normal in your 20’s. It’s the first time that I’ve felt so aware of my mortality and it probably doesn’t help that the Facebook and Netflix algorithms keep feeding me documentaries on the topic". The band will be extensively touring the Doomsday EP over the summer months, with a headline UK tour, and US support tour set to be announced in the coming weeks. TWITTER.

Tempesst are another band we first discovered back in the summer of 2016, and the new single 'A Little Bit Of Trouble' is our fourth feature for the band. The bands well crafted alt rock might reflect on a less than happy incident in an East London pub, however the track still sounds warm and inviting to listen too, as the strings and guitars intermingle to great effect, behind refined vocals and harmonies.