Tuva’s intrepid artistry has garnered favorable comparisons to Kate Bush, Cocteau Twins, David Lynch, and CocoRosie. Her songwriting exudes an indie-pop mystique, easing through delicate, piano-led folk, softly-soaring post-rock, and carefully-crafted sound design. Floating over these carefully-composed songs and densely textured soundscapes are Tuva’s fluttery vocals which manage to be both visceral and vulnerable. Tuvaband’s latest album, New Orders, out October 21, 2022 —her fourth overall—is a bold exploration of the many facets of her creativity. It marks the first time she did everything on an album, including playing all the instruments (except trombone and drums, though she programmed these beforehand and additionally kept parts of it), recording, producing, and mixing. It’s a pure transmission of Tuva’s full-bloom artistry.

New Orders’ first single is the album’s opening track, “Rejuvenate,'' a song that is both haunting and hypnotic. Wrapped in shoegaze style textures and propelled by trip-hop drums, it pulls the listener into a warm pulsating womb. “During the height of COVID, I listened to music to feel comforted. I wanted to write something that felt soothing, and as this is a song about a friendship, I decided to write from a more empathic angle.” Tuva shares. The song overflows with grounding affirmations, and one choice lyrical passage reads: Nothing’s in vain - step back and contemplate/I know you’re in pain - take your time - rejuvenate/I think you’ll be fine - breathe in and accumulate/Let’s intertwine - be nothing but compassionate. 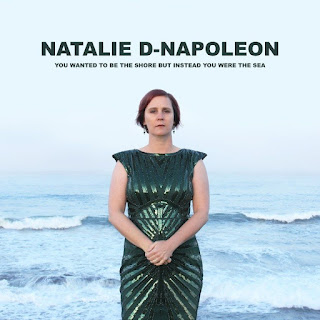 Natalie D Napoleon - You Wanted To Be The Shore But Instead You Were The Sea (Album).

Sometimes in life and music you just have to say 'What-the-hell!’. Having spent 25 years playing music and a decade living and performing in California, Natalie D Napoleon decided to return to her native Western Australia. She had just been awarded a prestigious national poetry prize and was subsequently offered a scholarship to undertake a PhD in poetry. What long-suffering musician could say no to that? After two decades of performing everywhere from grimy Australian pubs to commanding the stage of international music festivals, Natalie had all but given up on music. It didn't seem to love her quite as much as she loved it. But before she said goodbye to her American band, she decided to record her latest collection of songs.

A lot had changed since Natalie recorded her 2012 release - Leaving Me Dry - in a lavish Santa Barbara studio with an all-star cast. Her long-time sidekick Kenny Edwards, who for decades was Linda Ronstadt’s leading man, had passed away while David Piltch was back on the road with k.d. lang. Eight years on and Natalie had an album's worth of songs, most of which were written on the front porch of her 100-year-old Santa Barbara cottage and honed live with her rustically orchestrated fourpiece. So Natalie threw caution the wind, said 'What the hell!' and went into an old wooden chapel nestled in the hills behind Santa Barbara with a single microphone to see what the band could capture. The intent was to record the songs for posterity. With that one mic they recorded 12 songs that Natalie considered worthy of everybody's time.

The aim - to capture the beauty and spontaneity of each song’s performance when it was fresh and new, the joy of four people playing music in a room together and the sonic beauty of the century-old wooden chapel, “I went into the room with Dan Phillips, Jim Connolly, and Doug Pettibone, with faith and trust in each other and, damn, the music gods delivered.”

The result is the 12-song album, You Wanted To Be The Shore But Instead You Were The Sea -captured live with a single microphone. When Natalie played the recording to friends, they told her she needed to release it. So she did - via Bandcamp. Radio in Australia started playing the first single, "Thunder Rumor" and enthusiastically added it to playlists Australia-wide. When the second single, "Wildflowers" was released the album climbed to the very top of Australia's AIR Independent Albums Chart. With rave reviews from critics and word to mouth support it seemed that the universe was responding in kind. Now, in 2022, with some much-needed help by a grant from the Western Australian government, the album is being released internationally for the first time, on her own imprint - First Blood Recordings. 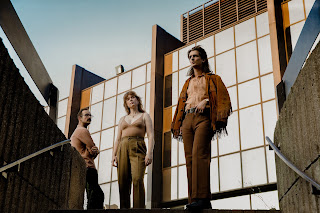 The Hamilton, Ontario-based trio, Ellevator are today sharing their new single, "Party Trick" which arrives as the final advance track to be lifted from their forthcoming Chris Walla-produced debut album, The Words You Spoke Still Move Me  – out May 6 via Arts & Crafts. The new single arrives following earlier tips from NPR, Consequence, The Needle Drop, Exclaim, FLOOD, The Line of Best Fit, Under the Radar, CBC and more. The band, who have just wrapped up a run of US dates including a stint at SXSW will support the release of the new record with Canadian dates this May with support coming from Pleasure Craft (Toronto) and Deanna Petcoff (London, Hamilton).

The band, which is comprised of Nabi Sue Bersche, guitarist, Tyler Bersche and bassist/synth player, Elliott Gwynne, will deliver on the promise of their self-titled 2018 EP with their long-awaited debut album. The record was pieced together across numerous locations but primarily while living together at The Bathouse (a Kingston-area facility owned by Canadian alt-rock legends The Tragically Hip) and comes off the back of earlier dates with Amber Run, BANNERS, Cold War Kids, Arkells and Dear Rouge. Across 12 tracks, it inhabits an emotional landscape that is both breathtakingly intimate and impossibly vast, documenting various experiences to turn universal (existential longing, romantic power struggles, the neverending work of true self-discovery) and highly specific (e.g., one band member’s journey in extracting herself from a cult) storytelling into a truly hypnotic body of work, giving rise to the kind of radiant open-heartedness that radically transforms our own perspective.

Ellevator poses a fantastic ability to sculpt these mammoth, melodramatic post-rock and indie-rock soundscapes, somewhat inspired by the late-aughts sounds of Spoon, Metric, Interpol and Arcade Fire, as well as the stadium-ready sounds of U2, Kate Bush and Peter Gabriel. "Party Trick", the album closer, arrives as one of the album's twinkling, emotive ballads utilising delicate piano and brooding guitar textures.