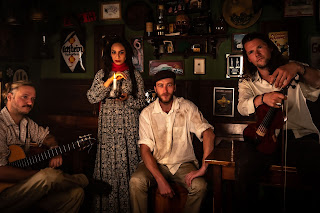 Liberty Awaits is an epic paying tribute to the great immigrant voyage. “The initial idea for the song came when trying to pay homage to my late grandfather, Leon English.” Says Bennet. “His ancestors fled hard times in Ireland and crossed the Atlantic in search of a better life. I wanted to highlight the importance of that journey to my very existence.”

While drawing influence from the Great Famine that led to the death and displacement of millions of Irish, the song is meant to tell a broader tale of the migration saga and transcontinental journey. Featuring on the track is Ecuadorian singer Carola Zarega, who along with the band, channeled her own experiences when contributing to the recording.

The track begins with a melancholic violin melody. Eerie string arrangements and the dreamy vocals of Carola Zarega create a contradictory soundscape that leaves the listener a feeling of hopeful despair. An upbeat folk dance coaxes the listener from the trance, representing a kind of “last hurrah” before the perilous journey across the sea. Carola’s vocals soon take on a new form, as the song breaks from the traditional dance and becomes more pensive. The band creates an emotional soundscape on top of which Carola’s vocals float above the waves, the melodies both apprehensive and courageous.

The journey begins to accelerate as the ship battles the elements before excitement builds at the eventual site of land. Suddenly the listener is brought full circle, with the reemergence of the folk dance, this time with more nuance. The voyagers have arrived in a new land but have not lost their traditions.

A big song, and a massive video earning the honour of sharing same title as the group’s up coming studio album. The video was filmed and edited by Martin Förster & Eric Schmidt @Centre Films GmbH in Radebeul, Germany. Filmed in Radebeul, DE at: Die Schmiede, on a field; in Lelystad, NL on the Admiraal Van Kinsbergen; in Kortrijk, BE at Mary's Irish Pub. 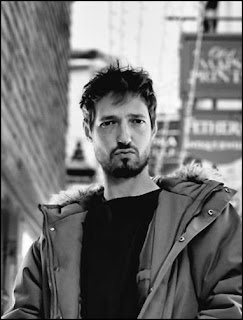 Just released on indie label Not Saints, Little Tealeif’s new single ‘Pedestal People’ is a brooding earworm of a debut. Taken from the forthcoming EP ‘Charcoal’ (out 25th November) Little Tealeif blends elements of dance, rock, hip-hop, and pop with the mastery of producers like Mark Ronson or Rick Rubin.

Currently based in Kent, the multi-instrumentalist, producer, and lyricist’s music is easily relatable and tackles modern themes such as isolation, inadequacy, addiction, and self-belief; all delivered with perfectly crafted genre-bending skill.

Having discovered guitar bands in his early teens, Little Tealeif’s passion and fascination for all things music was instant and he quickly became a prolific songwriter. After spending time travelling in Australia in his 20s, Little Tealeif returned to the UK and founded his first band with dreams of making music his life. Sadly, alcohol and drugs were becoming a regular feature for Little Tealeif and he relocated to Paris in a desperate bid to reinvent himself. Finally, after a chaotic ten years, in which music barely featured, Little Tealeif returned to the UK and checked himself into rehab. Today, he is clean and sober, making music again, and loving life.

Speaking about the upcoming release of ‘Pedestal People’, Little Tealeif said: “Pedestal People was written about acquaintances who had their lives together and I was a little bit jealous of that. I’ve come to learn that nobody has their lives together and it’s just a perspective on that situation of comparing ourselves to each other.” When asked about what listeners will take from his music, Little Tealeif said: “I hope people take joy from it and that they can understand the layers and the messages in the songs. I hope they can also see that I’m a bit tongue in cheek, a bit jokey, and don’t take myself too seriously.” 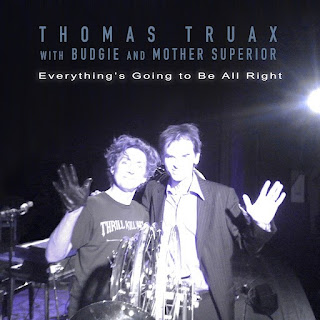 Thomas Truax - Everything's Going to Be All Right.

American singer-songwriter and inventor Thomas Truax has joined forces with infamous drummer Budgie for “Everything’s Going to Be All Right”. An eerie post-punk track that sees sharp spoken-word vocals, atmospheric guitar wobbles and reverb-drenched tremolo descend towards a catchy chorus that sees Truax bear his upbeat rock’n’roll teeth, “Everything’s Going to Be All Right” is taken from a new album ‘Dream Catching Songs’ (due January 2023).

Initially recorded in Berlin before being completed in Birmingham, the eclectic new track sees Truax - who has become known for his self-made musical contraptions - bring another of his inventions to life. Mother Superior is a motorised mechanical drum machine made almost entirely from recycled parts, and the machine features on the track alongside esteemed English drummer Budgie, best known for his work with Siouxsie and the Banshees, The Slits and The Creatures.

A bizarre and buoyant cut of outlandish beats and offbeat idiosyncrasies, Thomas Truax explains of the track: “The scene is a kitchen full of ‘beautiful losers’, crowded around a messy kitchen table, wrestling with current circumstances and celebrating comfort in friendship. There are references to William Shatner’s ‘real space flight’, Coco Chanel’s old flat, and characters from my fictional world ‘Wowtown’”.