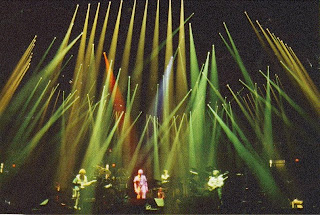 There was a time when Genesis would have automatically been included in my top favorite five bands.

When Peter Gabriel left, like many I thought it was the end, however although the sound and style gradually developed, it was still Genesis, and some good music was produced.

In 1980 the album Duke was released, and I was really impressed ! With hindsight this was the beginning of the end of my Genesis 'must buy - must have' era. After that for whatever reason only the odd song here and there appealed to me.

As regards Phil Collins solo material, sorry I have tried, but it ain't for me. I think early on, he made to much of an effort not to sound like Genesis, but with respect was never going to be a crooner.

To the point - This is Genesis towards the end of my 'Top Five Favorite' era.

The details - Genesis live at The Lyceum London (second night) on the 7th May 1980. The Lyceum was one of the smaller venues they played on this tour.

Sound Quality: From the BBC master recording of the show (pre FM, no static at all - if you excuse the pun). Put simply it is a professional recording, that merits superlatives such as awesome. It also helps that Genesis were really playing well that night!

Anonymous said…
amazing band, amazing post! .. is anyone getting this? thanks extremely beehive, ultra super show, and starting with motherlode, beautiful song.. you keep bringing it.. tremendous and a big thank you! zenarcher
13 September 2007 at 01:21

Anonymous said…
awesome show and sound quality!! thanks beehive for your great work on this blog and bringing music to those that wouldn't have heard it otherwise!! big up "Q"
13 September 2007 at 05:21

Anonymous said…
Thanks for this one out of my favorite Genesis era. Indeed 1980 was the only time I had the chance to see GENESIS in concert.
13 September 2007 at 10:43

bobster said…
Yeah got moved for being unruly at Twickenham. Share so much with this blog...same age approx I suppose. Particular memory Radio Caroline 1976 Norfolk Broads holiday... Supercharge

Anonymous said…
not to be a downer here but that picture is not from the 1980 Duke tour! Looks more like a shot from the 1985 Mama tour program. The lighting technology shown in the picture did not exist in 1980. Genesis used computerized or intelligent lights that moved and changed color etc. called Verilites for the first time on the Abacab tour. There were not sufficient numbers around to set up the scene in the picture until 85... And yes that was a great show.
7 July 2011 at 07:06

Anonymous said…
This has got to be one of the best live shows of the Duke era - I was 14 and taped the tv broadcast at the time by sticking a cassette recorder in front of my s$%^&ty tv! I think it was an 'Old Grey Whistle Test' broadcast.
This is a big upgrade for me!
15 June 2016 at 04:56