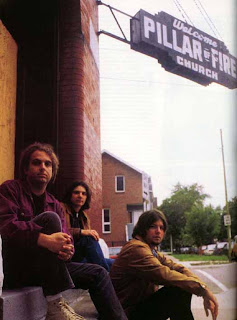 Although Uncle Tupelo broke up before they achieved significant commercial success, as mentioned on the recent Wilco concert posting, the band are renowned for their impact on the alternative country music scene.

The group's first album, No Depression, became a byword for the genre and was widely influential.

Uncle Tupelo's sound was unlike popular country music of the time, drawing inspiration from styles as diverse as the hardcore punk of The Minutemen and the country instrumentation and harmony of the Carter Family and Hank Williams.

What was very surprising, though, is that, unlike the band's previous country-meets-punk releases, 'No Depression' and 'Still Feel Gone', the third album was performed almost exclusively on acoustic instruments.

It's a testament to the group's courage and integrity that, in a time when Nirvana's ''Smells Like Teen Spirit'' had made the world safe for grunge rock, their third album 'March 16-20, 1992' was nothing of the sort, with the band taking an alternative route.

This concert after the release of the third album is fittingly an acoustic set.

Recorded at a folk festival on the 11th September 1992, at Beliot College, Beliot WI, in the USA, this is a soundboard recording.

The concert includes the first known version of 'Motion Pictures' by Neil Young.

Beehive Candy said…
COPY AND PASTE TO YOUR BROWSER:

Luke Hickox said…
Thanks very much. This sounds terrific. A great treat for me to hear this show. Much appreciated.
2 March 2009 at 21:26