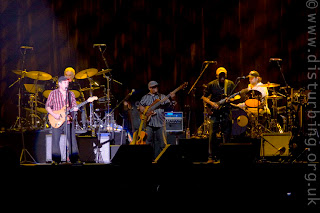 Reloaded 13/May/2015 - This first appeared on Beehive Candy in January 2009, survive the gushing intro and your in for a superb gig.

This is Paul Simon live at the UCL Bloomsbury Theatre, London, on the 25th May 2006, in part promoting his then new album 'Surprise'.

01 Introduction
02 Diamonds On The Soles Of Her Shoes
03 Outrageous
04 Slip Slidin' Away
05 You're The One
06 Me And Julio Down By The Schoolyard
07 How Can You Live In The Northeast?
08 The Boxer
09 Father And Daughter
10 Loves Me Like A Rock
11 Graceland
12 Wartime Prayers
13 Outro

Comments: The UCL (University College Theatre) is in Central London and seats 535, making for quite an intimate gig, especially for someone who can fill major city parks.

I understand he also performed 'Cecilia' and 'Boy In the Bubble' on the night, these may have been edited out to fit the show into a nice rounded one hour (ah - those schedulers and their stop watches).

Ironically the introduction goes on way to long and is rather gushing, (learning point, never let an obsessive fan near a microphone). The first song 'Diamonds On The Soles Of Her Shoes' is nicely re-worked, the guy after all is a musical legend, that's all that needed to be said at the start.