May 12, 2015
Edition three already, well there have been some real gems come our way and so to share them seems reasonable, would you not agree, anyway enough tripping over my own words and down to business or music if you prefer...

Well if this round up is called 'Out Of Our Inbox' and a glance above confirms that it it, then King of the Travellers did not so much come out of it, more they leaped, charged and flew out, taking no prisoners, with the fantastic track 'Trenches'. An absolute powerhouse of a song, genre busting, energising and what's more there from Freemantle, Australia, so once again Australia is throwing up another great band for the world to discover.

They have been described as follows - Having already established themselves as one of Fremantle’s most exciting up and coming bands, King of the Travellers are set to explode onto the national scene with the release of their upcoming single ‘Trenches’. A band that’s almost impossible to pin down to a single genre, The Travellers draw on a number of influences including punk, folk, gypsy music and sea shanties. In their two and a half years as a group, they've proven themselves to be amongst the most entertaining live bands in Perth today.

‘Trenches’ very much follows in this vein, with an emphasis on punk and sounds from Eastern Europe. The use of mandolin, French horn and accordion coupled with the distinctive vocal delivery of singer Nathan Hull gives the song all the trademark sounds of a King of the Travellers song. The single was recorded at Blackbird studio with acclaimed producer Dave Parkin (Jebediah, Karnivool, but not the coach of Carlton Football Club’s 1995 Premiership team) and mastered by Grammy Award winning William Bowden (Gotye). ‘Trenches’ paints a picture of a handful of soldiers in a nondescript war choosing a bottle of booze over guns and ammunition. It’s short, sharp, catchy and brimming with attitude.

Crooked House Road are a Toronto based indie folk band who contacted Beehive Candy just over a week ago and kindly provided me with a copy of their debut album due out on May 23rd 2015 and the self titled album is produced by Juno winner and Grammy nominee Ken Whiteley..

This is how member Shaina Silver-Baird describes the band - Crooked House Road began when I met Mirian Kay at an open mic and we immediately sparked a friendship. She became my musical partner in crime and we began performing my original songs around Toronto. Since then Crooked House Road has grown into a full band with our own unique fusion of folk, pop and blues music.

After a successful first show at Soulpepper Theatre, we set out to build our repertoire and find a solid collective of musicians to write our first full length album. In a way the Crooked House Road musicians found us: Derek Gray was my upstairs neighbour; Gram Whitty was a substitute musician we brought in for one gig and never let go; I met Joshua Skye Engel at synagogue playing a show for kids; and Tom Mifflin was an old buddy from university.

From this highly recommended album we have the following live session recording of the opening track: 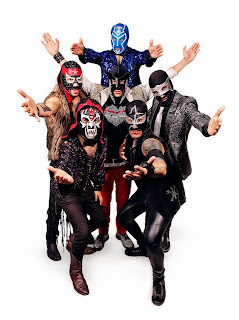 You have got to check out El Conjunto Nuevo Ola (ECNO), and their incredible music. Here are some well written words about them as I'm being lazy again.

A peculiar concept for a band, ECNO have drawn attention from thousands of people who have labeled them “los enmascarados,” or "the masked ones.” Their faces are covered with luchador (wrestler) masks at all times, thus hiding the true identity of each group member.

While many media reporters have asked, no one yet knows who these anonymous rockers are. What is known is that ECNO have graced the stages of the top Hispanic television networks, including Telemundo, Telefutura, and Univision. The one common factor in all of their performances is top-notch entertainment and the band’s obvious intent to spread a genuine sense of goodwill. Singer Urbano Lopez of ECNO recently summarized the band’s goals:

"At our shows, we want the good times to be a sure thing. We are musical wrestlers, and our enemy is the mundane and boring aspects of everyday life. We want every single audience member to sing, dance, and enjoy themselves.”

Lots of great videos over on YouTube HERE. The wonderful cover version of Billy Idol's 'Dancing With Myself' below.

Jennie Vee is gaining a lot of attention from some very influential people in the music business. She is currently on tour as bassist for Courtney Love, who is touring with Lana Del Rey. Jennie’s second EP, Spying, is due out this summer, as her solo career goes from strength to strength.

As I Remain bone idle here are some words written about Jennie by someone else - Last year Jennie caught the ear of Grammy Award-winning producer Chris Lord-Alge (Bruce Springsteen, Green Day, Stevie Nicks) when he handpicked and remixed her song “Wicked.” Years after Alan McGee left a handwritten compliment for Jennie because he liked her demos, the Creation Records founder immediately booked her for his first-ever Creation Unsigned Acoustic Night. Snow Patrol’s Paul Wilson mixed the title track of her upcoming release. In the UK and Europe, Jennie is signed to 25 Hour Convenience Store, owned and operated by Gary Powell of The Libertines.

Jennie’s dedication to memorable songwriting reminds listeners of what they love about ‘80s college rock. But she also makes her songs her own, steeping her mixes in the soothing brashness of deeply revered shoegaze and dream pop pioneers such as Ride and My Bloody Valentine. Jennie’s vocals, unfettered, deeply emotional, feature perfectly arranged verses, driving pre-choruses, and finally, airy, memorable choruses.

She has very recently made an excellent cover of Echo and the Bunnymen’s “Lips Like Sugar,” and we feature the video below!

Will from The Rebel Light contacted us a few days ago and had this to say - Music saved my life…and so did moving to California.

A few years ago I moved to the West Coast.  I was in a band that I didn’t believe in, playing songs that I’d written but felt soulless.  Fortunately for me that band fell apart.

When we started The Rebel Light, nothing was planned and no direction was discussed.  We just let the music take control and simply stopped caring about what or who we should be or sound like.  Most importantly we just ignored all the bullshit and just started playing what we felt in our hearts…..

The culture and those infamous California vibes began to seep into our soul and penetrate every part of our music.
We became truly inspired by our new world and our sound slowly began to evolve, taking in the past and present sounds of the California landscape. We think we have finally found our own voice and hope that our music does an okay job at representing our new home.

We have really tried to embrace that DIY spirit and produce/engineer all our own music….recording vocals in a bathroom and the drums in a woodshed. We start reaching out to some radio stations ourselves and so far people seem to like what we are doing.

Clearly California and the West Coast has it's own special something that sparks so much great music along with innovation and experimentation. The band have been getting airplay from some of the better U.S. radio stations ( KROQ, KCRW, KEXP, KTCL, KCSN), and from what I have heard from The Rebel Light deservedly so! Check out the track Strangers, it has that 'Californian something'.

Ludodowwn is the work of 20-year-old West Australian songwriter and electronic producer, Bensen James. Beginning as a medium for bedroom sound experimentation, James found it demanding more and more of his attention, resulting in his departure of several bands and university to decipher what it wanted. After a long process of evolution, Ludodowwn now wants to be heard.