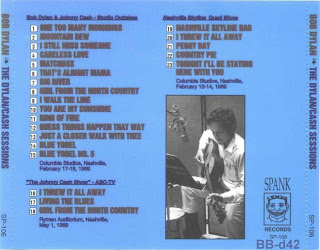 This is hardly making it's Internet bootleg debut here, however the Bob Dylan and Johnny Cash sessions from 1969, remain elusive for many collectors, and I am happy to do my bit to help.

The often asked question regarding these sessions is, why have they never been officially released ?

The musically historical importance, audio quality, and perhaps the actual performances themselves, make that a reasonable question, however in all honesty forty years on, the 'cats out of the bag' if you get my drift?

The contents of the sessions are detailed in track lists below, if you have just passing interest in either of these two artists, I would suggest that the recordings are well worth a listen.

Genre: In all fairness Bob Dylan and Johnny Cash will suffice.

Unknown source - not on all bootleg versions.

Comments: The very thorough Bobs Boots site had the following to say regarding this material.

'The outtakes are great fidelity studio recordings, but the performances are very loose, first time trys. This is a 'must-have' disc for historical reasons, but it will probably not be one that you will want to play every day'.

That is a reasonable summary, however I played a few tracks again earlier today, and my first thought as I went on to other matters (work as it happens), was I must listen to this all the way through again!

The studio sessions were of course linked to Bob Dylan's work on his ninth 9th proper studio album 'Nashville Skyline'.

When sessions resumed on February 17, "Tonight I'll Be Staying Here With You" was the primary focus, and a master take was selected from a total of eleven takes. An instrumental, titled "Nashville Skyline Rag", was also recorded at the beginning of the session, and it was later included on the album.
Sometime during that session, country legend Johnny Cash stopped by to visit. A friend and label-mate of Dylan's as well as an early supporter of his music, Cash had been recording next door with his own band. The two wound up recording a series of duets, covering Dylan's "One Too Many Mornings" and "Don't Think Twice, It's All Right" as well as Cash's own "I Still Miss Someone." None of these were deemed usable, but Cash returned the following day to record more duets.
The session on February 18 was devoted exclusively to duet covers with Cash. "One Too Many Mornings" and "I Still Miss Someone" were revisited, and rejected, yet again. "Matchbox", "That's All Right Mama", "Mystery Train", "Big River", "I Walk the Line", and "Guess Things Happen That Way", all made famous by celebrated Sun recordings performed by Carl Perkins, Elvis Presley, and Cash himself, were all attempted on February 18, but none of these were deemed usable. Covers of Jimmie Rodgers' "Blue Yodel #1" and "#5", Cash's "Ring of Fire" (written by his wife, June Carter and Merle Kilgore), "You Are My Sunshine", "Mountain Dew", the traditional ballad "Careless Love", the traditional hymn "Just A Closer Walk With Thee", "How High The Water", and "Wanted Man" (a song written by Dylan specifically for Cash) were also attempted, and all were rejected. There was little enthusiasm for any of these tracks, but one duet of Dylan's, "Girl From The North Country" (which originally appeared on The Freewheelin' Bob Dylan), was ultimately sequenced as the album's opener.

and of course Johnny Cash

zappahead said…
Girl from the North Country is the only track I'm familiar with so all the others are bonuses and very much appreciated...cheers.
10 June 2015 at 19:07

Anonymous said…
Thanks so much! My mom told me her old album accidentally got thrown away and she was so upset! I'll be able to burn these to a CD and print off the old cover art for her just in time for Christmas! Much appreciated!
14 December 2016 at 02:46