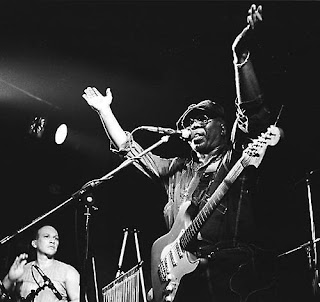 This is a wonderful collection of Curtis Mayfield rarities, that was released as a bootleg entitled 'Keep On Keepin' On'.

I think the original version came into circulation on silver disc, not that long after Curtis passed away ( ten years, this coming December).

Since 2003 it has appeared predominately on a limited number of Soul, R&B, and Funk enthusiasts web pages.

However Curtis Mayfield had a message that went way beyond just musical style or genre.

Part of the Wikipedia entry for him states:

'Curtis Mayfield is remembered for his introduction of social consciousness into R&B and for pioneering the funk style in the 1970s. Many of his recordings with the Impressions became anthems of the Civil Rights Movement in the 1960s, and his most famous album, Super Fly, is regarded as an all-time great that influenced many and truly invented a new style of modern black music'.

It is the case that his 'social consciousness' in the 1970's drew me to his music.

Radio Caroline played 'We Got To Have Peace' on a good number of occasions, the presenters on board the radio ship at the time, clearly supporting that aspiration, as they struggled to remain on air, for simply having the audacity to play music the limited number of 'other' UK radio stations chose to ignore.

Source: From the CD edition (Original Silver), ripped via WAV to MP3 in this case, the original material was either studio soundboard, or FM radio broadcast.

09. We People Who Are Darker Than Blue
10. Give Me Your Love

The original source for this specific copy of the boot, has deleted track two, as this was released on the 'Old Grey Whistle Test DVD Vol. 1' in 2001. That's fine as the whole thrust of this bootleg was the rarity of the material.

Links: Wikipedia is to the point, and well edited on this occasion, it's a good reminder on the legacy of Curtis Mayfield - HERE.

Comments: What you have not got, you cannot pass on, ironically 'We Got to Have Peace' was a key track in my own personal discovering of Curtis Mayfield.

Sadly Curtis Mayfield was badly injured and suffered many health problems for much of the last decade of his life.

His music for me however, fits comfortably in to the very limited and hard to gain entry 'timeless' category.

Purchase: A wondeful selection of over one hundred and fifty DRM free MP3's - Curtis Mayfield

Anonymous said…
This link appears to be broken. Tried 3 times but it disconnects.
Love what you have on the site.
16 October 2011 at 12:41

Anonymous said…
You're the best!