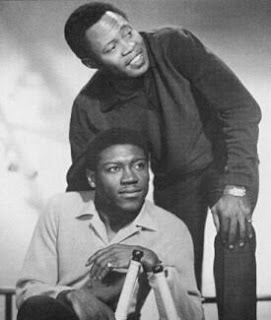 This is a wonderful four song set from 'Soul Men' Sam and Dave. Although this is hardly an exclusive to Beehive Candy it is a must have for any soul music fan and worthy of a share. The audio quality is incredible considering the age of the recording.

The following from wikipedia puts the whole show in context: Sam & Dave's live act earned them the nickname "Double Dynamite". Phil Walden, Otis Redding's manager, said "I think Sam and Dave will probably stand the test of time as being the best live act that there ever was.

Those guys were absolutely unbelievable. Every night they were awesome." An October 1968 Time article reads: "Of all the R & B cats, nobody steams up a place like Sam & Dave ... weaving and dancing (while singing!), they gyrate through enough acrobatics to wear out more than 100 costumes per year." Jerri Hershey described in Nowhere to Run: They carried red suits, white suits, three piece lime green suits, all with matching patent boots and coordinated silk hankies woefully inadequate to absorb a soul man's nightly outpourings. Both Sam & Dave talk a lot about sweat. To Dave, its proof that he's worked for his pay. For Sam its essential, almost mystical. He says he can't work without it. "Unless my body reaches a certain temperature, starts to liquify, I just don't feel right without it." Wayne Jackson said Sam & Dave left puddles of sweat onstage by the end of a performance.

In March 1967, Sam and Dave were co-headliners for the Stax/Volt Revue in Europe, which included Booker T & the MGs, The Mar-Keys, Eddie Floyd, Carla Thomas, Arthur Conley and headliner Otis Redding. For Sam & Dave, it was their first time in Europe, largely to all-white audiences, sometimes up to 2,000 people. Although Redding headlined the tour, many agreed Sam & Dave stole the show on many nights. According to Redding's and Sam & Dave's manager Phil Walden, Redding refused to be booked on the same bill with Sam & Dave again, not wanting to have to follow their explosive act. A live version of Sam and Dave's Double Dynamite LP track "Soothe Me" was recorded in Paris during the '67 tour. Released as a single in mid-1967, it continued Sam & Dave's string of top 20 U.S. R&B hits and was their first in the UK Top 40.

When Sam & Dave arrived at Stax, they worked with producer & engineer Jim Stewart and songwriters including the MGs' guitarist Steve Cropper, who wrote or co-wrote four of their first eight recordings. The duo then moved to relative newcomer writers and producers Isaac Hayes and David Porter. Hayes and Porter wrote and produced the duo's biggest hits (although they did not receive production credits until the Soul Men LP and singles). According to Moore and Prater, they also greatly influenced the duo's singing style, and had them shift their recording style from the style of their Roulette records to a more live, more energetic gospel, call-and-response feel and beat driven soul style the group is known for today.

Sam & Dave's Stax records also benefited from the musicians and engineering at Stax. The Stax house band, Booker T. & the M.G.'s, and the Stax horn section, the Mar-Keys had world-class musicians who co-wrote (often without credit) and contributed to recordings—the same musicians who recorded with Otis Redding, Wilson Pickett, Carla Thomas and other soul artists. Sam & Dave's Stax recordings through 1967 were engineered by Stax founder Jim Stewart, who created the Memphis Sound by recording live in a single take. Stewart is credited for instrumental mixes that allowed for instrumental separation and the distinct contribution of each instrument to the overall feel of the song. Hayes and Porter are in the Songwriters Hall of Fame, The Mar-Keys are in the Musicians Hall of Fame, and Booker T. & the MG's, Jim Stewart, Isaac Hayes and Sam & Dave are all in the Rock & Roll Hall of Fame.