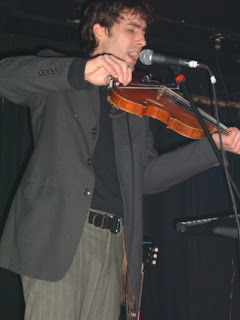 I have to admit I was about ten years late in 'discovering' Andrew Bird. It was only a couple of years ago that I first gave his music a listen and I have been kicking myself ever since (OK not literally), however the back catalogue has been fun to say the least.

Back in the late 90's the music was quite different to today's indie rock and folk direction, with an element of old time swing and harmonies.

Taking on the role of bandleader, Andrew Bird released Thrills on Rykodisc in 1997 with his group Andrew Bird's Bowl of Fire, shortly followed by second album Oh! The Grandeur in 1998. Both albums were heavily influenced by traditional folk, pre-war jazz, and swing, with Andrew Bird relying on the violin as his primary musical instrument, as well as providing vocals along with his trademark verbose lyrics. The Bowl of Fire featured musicians from Andrew Bird's home town of Chicago, including Kevin O'Donnell, Nora O'Connor, Andy Hopkins, Jimmy Sutton, Colin Bunn, and Ryan Hembrey. During this period Andrew Bird was also a member of the jazz group Kevin O'Donnells Quality Six, for which he was the lead singer and violinist.

This is Andrew Bird's Bowl Of Fire live in January and May 1998 with material recorded at two venues in Madison, Wisconsin, and Chicago, Illinois.

Tracks 1 to 8 were performed at Mad City Live, in Madison, WI, and Tracks 9 to 14 are from a performance at the Mercury Theater, Chicago, IL. As regards dates the Mad City gig was 1st January 1998. The latter is unknown however informed opinion says that May 1998 is most likely correct for the Mercury Theatre.