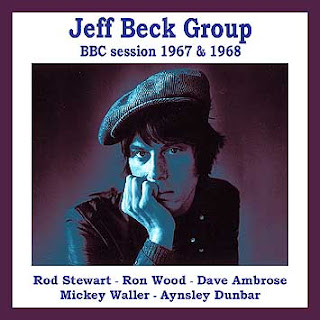 Reloaded 27/May/2015 - I wanted to feature this set of sessions recorded for BBC radio again for a couple of reasons. Firstly because it is so easy to forget the impact on pop, rock, blues and other genres, Jeff Beck had back then. He was respected by his counterparts and was not afraid to push the boundaries. Secondly Jeff Beck was a driving force for many other artists, witnessed by those around him on these sessions alone. It's all a long time ago now, but recognition for Jeff's musical legacy should I think be acknowledged.

This is a selection of recordings from The Jeff Beck Group, which were recorded as sessions for the BBC (Radio One), from 1967 to 1971. This is not the complete set of songs performed by the band for the BBC, however it does represent a very good flavour of the material the band were performing live at that time.

The audio quality of tracks one to nine are notably better quality than track ten to seventeen however the latter tracks include some classic material, along with off air comments and introduction from DJ John Peel. I have separated the material into two files along the above lines.

There were two versions of the Jeff Beck Group the first existing from 1966 through to 1969, and the latter group (with different musician line up) from 1970 to 1972. With the exception of two songs (which were probably from a longer 'in concert' performance) this material is from the original band line up.

3. Rock My Plimsol
4. The Tallyman

One of the reasons that bands were invited to perform sessions for the BBC during the 1960's and 1970's was due to the restricted 'needle time' that existed in the UK at the time. By undertaking 'live sessions' it enabled the BBC to provide more popular music performances, and get around the rediculous limitations placed on them by the 'Performance Rights' authorities. These crazy restrictions were also in part the reason that Offshore 'pirate' Radio took off in the 1960's and 70's. The legacy however has ironically given us high quality live performance recordings of bands from The Beatles through to The Yardbirds.

Nico said…
Very interesting recordins (as with everything you post). However, I could not fimd the links, is it be possible? Thanks so much in advance
Cheerz, N.
13 April 2010 at 11:10