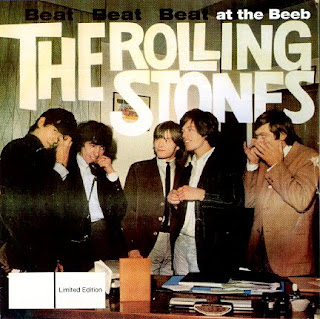 Reloaded 26/May/2015 - Another very popular rarity that remains searched after regularly amongst collectors of Rolling Stones material. This recording was seeded close to the original 'release' and the audio reflects that and is very clean and highly enjoyable. It remains a must have for anyone who remembers the raw energy the Stones had, that set them apart from so many right from the start.

Beat Beat Beat at the Beeb is probably the most comprehensive selection of The Rolling Stones BBC Sessions from 1963 to 1965 although many other bootleg compilations have surfaced, including 'Get Satisfaction If You Want' and 'Crackin Up'.

There is a question mark over the absolute accuracy of the dates of shows or recordings however Beat Beat Beat has a reputation for being well researched so are probably pretty accurate.

The cover art displayed is apparently from a rare 10inch German album version. As regards the actual performances themselves, then this is wonderful material, showing off a highly energetic and youthful band, that in the interview ponder whether they have a few more years in them, if only they had known.

Source: Various including BBC transcription discs and off air recordings.

Generally the audio quality is very good considerning the age of the material and the possibility that some is sourced from later generation copies. That said a reasonable amount of the recordings made it to BBC transcription CD's circulated to the Westwood One radio network.

You must be psychic, as was about to send you this excellant CD set.
Will dig out some other Stones stuff to send.

Anonymous said…
Thanks, I've been looking for these tracks for a while.
Dumb question:
Who's the women in the banner image of your blog?
21 April 2010 at 21:21