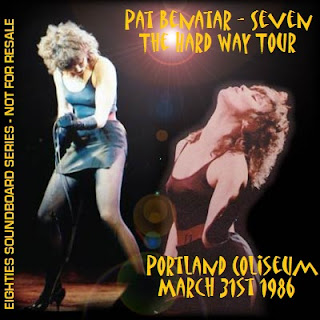 This is Pat Benatar recorded live at Portland Coliseum, Portland, Oregon, USA back on March 31st, 1986.

There is a pupose for featuring this excellent concert at this time. In June this year (2010) Pat Benatar's memoir, Between a Heart and a Rock Place was released. The book touches on her battles with her record company Chrysalis, and the difficulties her career caused in her personal life.

Those nice people at Harper Collins Publishers kindly sent Beehive Candy a review copy, however it arrived a month or so after the books release by which time a reasonable amount of reviews and publicity had already happened, and the impact we were likely to have was probably close to zero.

However I do like a good read, and it's been a while since I read a biography or memoir so I decided to enjoy the book. One thing this memoir is most definately not, is a sex and drugs and rock'n'roll epic. Rather it is a book firmly placed in reality and covers many of the outrageous demands placed on artists by a record company and the sheer sexist nature of some of the 1980's record industry 'men in suits'. Now I have no idea how much things have changed these days beyond what is told in the press, by it's very nature the music industry seems to be a magnet for lifes more colourful characters and within those some less desirable individuals are probably still turning up for a slice of the pie.

Pat Benatars book is highly recommended by Beehive Candy, she does not mince her words (what do you expect from a streetwise New Yorker), and a factual view of someones life in the rock business is a refreshing change from so many 'rock stories'. So enjoy the concert and if you can, check out Between A Heart and A Rock Place.

and as a teaser there was something very special about this tour for both Pat and Spyder and a massive amount of pressure on Pat for another reason (it's all in the book)....

Pat Benatar would hit the U.S. Top 10 with the  Number 10 single "Invincible" (the theme from the movie, The Legend of Billie Jean) in 1985. "Sex As a Weapon" would climb as high as Number 28 in January 1986, and "Le Bel Age"  in February. The album Seven the Hard Way peaked at Number 26, earning an RIAA Gold certification.

The title of the album is based on a bet in the game of craps: "Rolls of 4, 6, 8, and 10 are called "hard" or "easy" (e.g. "Six the Hard Way", "Easy Eight", "Hard Ten") depending on whether they were rolled as a "double" or as any other combination of values, because of their significance in center table bets known as the "hard ways"." The album was the band's seventh release in seven years. Benatar is holding a pair of dice on the album cover with three and a half dots each.