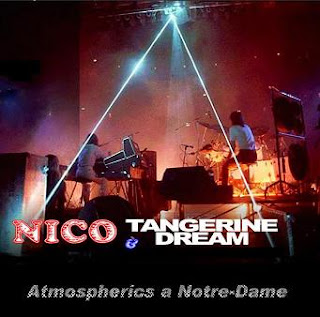 This is Nico & Tangerine Dream recorded live at the Cathedrale Notre-Dame, Reims, France, way back on the 13th December 1974. This recording was sourced from the a broadcast of the event on France Inter Radio and has been widely circulated as a silver CD boot.

The majority of this recording is of Nico performing solo with a Harmonium (she was the supporting artist) however over time Tangerine Dream seem to have been 'upped' considerably in the credits. The venues audio characteristics along with Nico's haunting style have a significant effect on this recording that as a result produced music of a timeless and fascinating nature.

About.com included this event in a list of 10 Infamous Concerts and had the following to say:

'Tangerine Dream —those krautrock  innovators turned new-age synth wallpaperists— picked an amazing venue for a show in December, 1974: Notre-Dame de Reims Cathedral; which had historically hosted the coronations of French Kings. Unfortunately, the promoter of the gig got a little swept up in the grandeur, overselling the show so blatantly that the crowd, when eventually crammed in, couldn't move; leading to audience members urinating where they stood. The Catholic Church was apoplectic, and banned concert events in Cathedrals for eternity. The show's legacy grows over the years thanks to a bootleg of opener Nico, playing her haunted, pump-organ dirges in a house whose natural reverb makes them sound like the ghostliest hymns'.