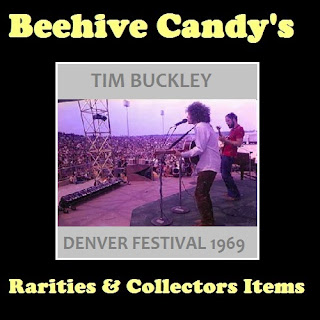 This is Tim Buckley performing just four songs at the Denver Pop Festival held at the Mile High Stadium, Denver, USA on the June 28th 1969.

Tim Buckley's short life is well documented, so a little about the actual Denver festival. The Denver Pop Festival was a three-day music festival promoted by rock promoter Barry Fey (Feyline) on June 27-June 29, 1969 which was largely overshadowed by Woodstock two months later. Unlike the free-form happening in upstate New York, the Denver festival had the full support and local resources of a major city, taking place in Denver Mile High Stadium. There were high expectations for the Festival; it was commonly called the "First Annual" Denver Pop Festival. The peak attendance was estimated at 50,000.

Frank Zappa is credited by some with inventing the audience wave during his set. He actually selected sections of the stadium (audience) to each make different odd sounds and gestures. He then composed a "tune" on his "crowd instrument".

Throughout much of the festival, a crowd gathered outside the venue and demonstrated against having to pay to hear the acts. They also tried to breach the gates and security fences. The Denver Police were forced to employ riot tactics to protect the gates. On the second day the battle between gatecrashers outside the stadium and the police suddenly affected those inside. With a combination of shifting wind and re-thrown canisters, tear gas suddenly swept over the crowd. The seats emptied into the concourses and onto the field.

Ticket prices were $6 per day, or $15 for all three days (Fri, Sat, Sun). On Sunday, after all possible tickets had been sold, the promoter announced from the stage that he was declaring it a "free festival". Other bands appearing included - Three Dog Night, Iron Butterfly, The Flock,  Poco, Johnny Winter, CCR, Joe Cocker, and The Jimi Hendrix Experience

Sound Quality: Very listenable (both in clarity and for it's age) mp3@128kbps

zico said…
This is surely a rarity and most importantlly is...Tim. And he was, is and always be my all time favourite singer-songwriter. He was unique. He was in a league of his own. He was music at its best. Thanks a zillion and more.
23 March 2011 at 12:22