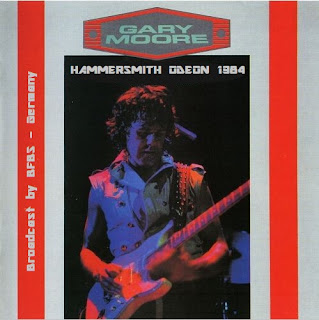 This is Gary Moore live at the Hammersmith Odeon, London back on the 11th February 1984.

As no doubt you will be aware Belfast born Gary Moore sadly passed away last month at just 58 years of age.

In a career dating back to the 1960s, Gary Moore played with artists including Phil Lynott and Brian Downey during his teens, leading him to membership with the Irish rock band Thin Lizzy on three separate occasions. Gary Moore shared the stage with such blues and rock luminaries as B.B. King, Albert King, Colosseum II, Greg Lake and Skid Row (not to be confused with the heavy metal band of the same name), as well as having a successful solo career. He guested on a number of albums recorded by high profile musicians, including a cameo appearance playing the lead guitar solo on "She's My Baby" from Traveling Wilburys Volume Three.

Fans have called for popular magazines such as Classic Rock, Guitarist and Total Guitar to do tributes. Twitter was flooded with tributes from fans for several days after the news was revealed.


This is part of a concert from 1984 recorded by the BBC and broadcast on BFBS (British Forces Broadcasting Service) Germany where this copy was sourced.