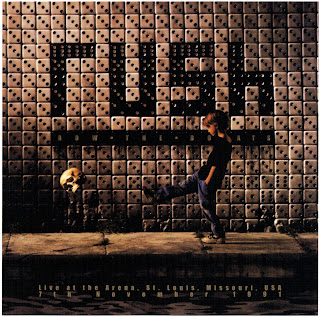 This is Rush live on the 7th November 1991 at The Arena, St. Louis, MO, USA from a bootleg double CD titled 'Row the Boats', which is linked to the Roll The Bones tour. Rush have been together since 1968 with a consistent band line up since 1974.

More than 40 years of activity has provided Rush with the opportunity for musical diversity across their discography. As with many bands known for experimentation, changes have inevitably resulted in dissent among critics and fans. The bulk of the band's music has always included synthetic instruments in some form or another, and this is a great source of contention in the Rush camp, especially the band's heavy reliance on synthesizers and keyboards during the 1980s, particularly on albums Grace Under Pressure, Power Windows, and Hold Your Fire.

The members of Rush have themselves noted that people "either love Rush or hate Rush", resulting in strong detractors and an intensely loyal fan base. In July 2008, Rolling Stone commented that "Rush fans are the Trekkies/trekkers of rock".

Rush started to deviate from their 1980s style with the albums Presto and Roll the Bones. Produced by record engineer and musician Rupert Hine, these two albums saw Rush shedding much of their keyboard-saturated sound. Beginning with 1989's Presto, the band opted for arrangements that were notably more guitar-centric than the previous two studio albums. Although synthesizers were still used in many songs, the instrument was no longer featured as the centerpiece of Rush's compositions. Continuing this trend, 1991's Roll the Bones extended the use of the standard three-instrument approach with even less focus on synthesizers than its predecessor. While musically these albums do not deviate significantly from a general pop-rock sound, Rush incorporated traces of other musical styles. "Roll the Bones", for instance, exhibits funk and hip hop elements, and the instrumental track "Where's My Thing?" features several jazz components. This return to three-piece instrumentation helped pave the way for future albums in the mid-90s, which would adopt a more straightforward rock formula.

Sound Quality: Good stereo mp3@128kbps (audiophiles - don't be put off, this is a fine and beefy recording).

Anonymous said…
Can't see the file download once on the flameupload site link above?
18 September 2011 at 18:52