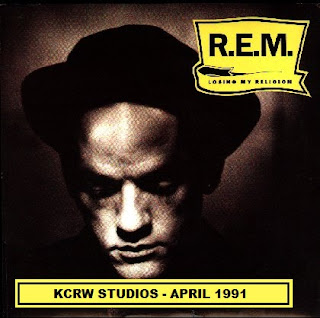 Regarding the lead up to this period of R.E.M. and the gigs themselves wikipedia informs us - The band's 1988 Warner Bros. debut, Green, was recorded in Nashville, Tennessee, and showcased the group experimenting with its sound. The record's tracks ranged from the upbeat first single "Stand" (a hit in the United States), to more political material, like the rock-oriented "Orange Crush" and "World Leader Pretend", which address the Vietnam War and the Cold War, respectively. Green has gone on to sell four million copies worldwide. The band supported the album with its biggest and most visually developed tour to date, featuring back-projections and art films playing on the stage. After the Green tour, the band members unofficially decided to take the following year off, the first extended break in the band's career.

R.E.M. reconvened in mid-1990 to record its seventh album, Out of Time. In a departure from Green, the band members often wrote the music with non-traditional rock instrumentation including mandolin, organ, and acoustic guitar instead of adding them as overdubs later in the creative process. Released in March 1991, Out of Time was the band's first album to top both the US and UK charts. The record eventually sold 4.2 million copies in the US alone,[50] and about 12 million copies worldwide by 1996. The album's lead single "Losing My Religion" was a worldwide hit that received heavy rotation on radio, as did the music video on MTV.[51] "Losing My Religion" was R.E.M.'s highest-charting single in the US, reaching number four on the Billboard charts. "There have been very few life-changing events in our career because our career has been so gradual," Mills said years later. "If you want to talk about life changing, I think 'Losing My Religion' is the closest it gets". The album's second single. "Shiny Happy People" (one of three songs on the record to feature vocals from Kate Pierson of fellow Athens band The B-52's), was also a major hit, reaching number 10 in the US and number six in the UK.[22] Out of Time garnered R.E.M. seven nominations at the 1992 Grammy Awards, the most nominations of any artist that year. The band won three awards: one for Best Alternative Music Album and two for "Losing My Religion", Best Short Form Music Video and Best Pop Performance by a Duo or Group with Vocal. R.E.M. did not tour to promote Out of Time; instead the group played a series of one-off shows, including an appearance taped for an episode of MTV Unplugged.