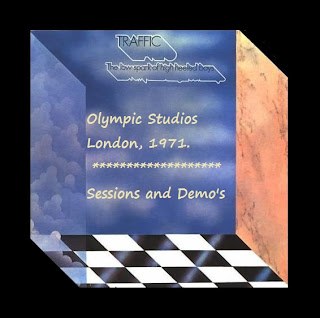 This is Traffic during 'The Low Spark Of High Heeled Boys' recording sessions, at Olympic Studios, London, developed across various dates in 1971.

After the break-up of Blind Faith in 1969, Steve Winwood began working on a solo recording, bringing in Chris Wood and Jim Capaldi to contribute, and the project eventually turned into a new Traffic album, John Barleycorn Must Die, their most successful album yet. Traffic went on to expand its lineup late in 1970, adding Ric Grech on bass. The group further expanded in 1971 with drummer Jim Gordon of Derek and the Dominos and percussionist Rebop Kwaku Baah. The live album Welcome to the Canteen was released in September and marked the band's break with United Artists Records. It did not bear the "Traffic" name on the cover, and instead was credited to the band's individual members including Dave Mason, who returned for his third and final spell with the band. The album ended with a version of The Spencer Davis Group song "Gimme Some Loving", which became a minor hit.

Following the departure of Dave Mason, Traffic released The Low Spark of High Heeled Boys (1971), which was a Top 10 American album but did not chart in the UK; the LP is also notable for its striking die-cut cover. It sold over half a million copies in 1972 when it received a gold disc, and was awarded a R.I.A.A. platinum disc in March 1976 for over a million total sales. Once again, however, personnel problems wracked the band as Grech and Gordon left the band in December 1971, and the month after, Winwood's struggles with peritonitis brought Traffic to a standstill. Jim Capaldi used this hiatus to record a solo album, Oh How We Danced, which would prove to be the beginning of a long and successful solo career. The album included a surplus recording from The Low Spark of High-Heeled Boys, "Open Your Heart", and the new tracks featured drummer Roger Hawkins and bassist David Hood, from the Muscle Shoals Sound Studio house band. Capaldi soon brought them on board to replace Grech and Gordon.

Henning2804 said…
Thanks a lot for this. A very good posting. Sounds brilliant and with a lot of amazingly good music from one of the sadly most underrated group of the seventies.
21 September 2011 at 18:48