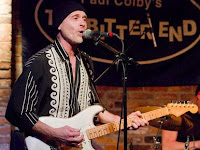 Background: John Seeger was definitely born a musician. Learning, practicing and mastering guitar was as much an everyday occupation to him as speaking Japanese and Spanish fluently, obtaining his black belt in karate, creating and building his successful NYC-based construction company, raising his 19 year old daughter and tending to his home and family. It may have seemed at times, even to John, that music was just another one of his passions and thirsts. Except that this one was impossible to quench. John sets the bar high in every aspect of his life, music is no exception. Over 15 songs on his roster to date, all written over the past year, John’s songs are like paintings, a depiction of life’s tales in each one. The mixture of his musical style is as diverse as the man. Sometimes bluesy with a hint of funk, sometimes pop or folk rock, always about a love lost or soon to be found, relationships and friends, but mainly about a man’s journey to find and keep his heart’s desire.
Post a Comment
Read more
More posts