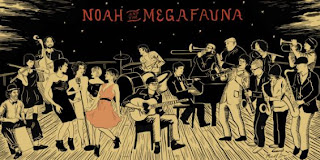 Background: Noah And The MegaFauna 's Anthem For A Stateless Nation is a raucous, whiskey-drenched, horn-laden soundtrack to the apocalypse with gypsy jazz for a right hook and big band swing. It's a modern day allegory of Noah's Arc exploring the displacement, wandering, panic, and ultimate redemption of the end times - that you can dance to. The brainchild of former Oliver Future frontman Noah Lit, Anthems For A Stateless Nation features a 10-piece, carnival-esque acoustic gypsy-jazz ensemble and is produced by Adam Lasus (Clap Your Hands Say Yeah, Yo La Tengo) with additional production by Joe Rogers (Kelli Scarr, The Shivers) , features world-renowned gypsy guitarist Gonzalo Bergara,drummer Steve Ferrone (Tom Petty and the Heart Breakers, George Harrison) , andguest vocalists Kat Edmonson, Marianne Dissard, Emily St. Amand-Poliakoff and Mindy Gaspar. The band recently released the song On And On as a free download. The track - which owes its haunting hook to th
Post a Comment
Read more
More posts