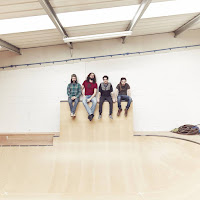 So lets find out a little about Los and the Deadlines - Describing themselves as a blue collar band, Los and the Deadlines came into being when Arizona native and lead vocalist Alex LoSardo moved to London in 2010. After being introduced to guitarist Neils Bakx, the two found common ground in their interests and influences and started composing music while studying for their undergraduate degrees.

After several line up changes and the release of two EPs, the band recruited Italian drummer Alberto Voglino and Israeli bassist Rotem Haguel. Together they embarked on the recording of third EP 'Perfect Holiday' which marked a new direction in the band's musical journey. The epitome of art-rock, Los and the Deadlines utilise cliches to convey their message through their broad-ranging sound, which encompasses grunge, stoner rock, noise rock, punk and sludge.

The band's 'Perfect Holiday' EP explores the absurdities of Western civilisation by contrasting the reality of an urban, deprecating society and its opposing depiction in the mass media. This in congruence is described not only through tongue in cheek lyrics but also through music where there is an ever present competition between noise and melody through thrashing riffs and thumping rhythms.

Sometimes you just need a band and a song that cuts to the chase. Los and the Deadlines seemingly have this sussed out and the featured track 'Feel At Ease' is the perfect remedy from a band that can belt out a song, without taking themselves to seriously. 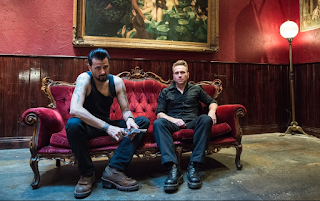 OK on to My Old Dutch and the background on the featured song - My Old Dutch is an explosive two-piece lo-fi rock’n’roll outfit from Melbourne. Bashing out 50’s inspired tales of love lost, found and stolen, their crunching wall of guitars, soaring melodies and bed of beats are sure to get your foot tappin’ and your heart racing!

My Old Dutch’s second single ‘Queen of the Dogs’ was recorded and produced by Craig Harnath, Jez Giddings and My Old Dutch at Hothouse Audio in St Kilda, Melbourne. Queen of the Dogs was one of the early tracks to come out of the My Old Dutch catalogue, inspiring them to turn a recording project into a live act.

Queen of the Dogs is the second single from My Old Dutch. This is "dirty edged blues" at its best. From the first crack of the snare to the last spluttering decay of the guitars. You’ll be hooked! Selling sex with pain, My Old Dutch is joined by the devilishly talented Cat Deller on vocals. With Cat belting out seductive lyrics, this track screams chaos and disorder. Yet you still can't ignore the simplicity of the structure. Queen of the Dogs. "She not never let you die"! 'Queen of the Dogs' by My Old Dutch feat. Cat Deller will be released 10th July 2015.

What can we add, this is another no nonsense classic rock'n'roll beast of a song with just enough originality and modern day slant to appeal to those who just fancy three minutes of bedlam to leap around the floor to. 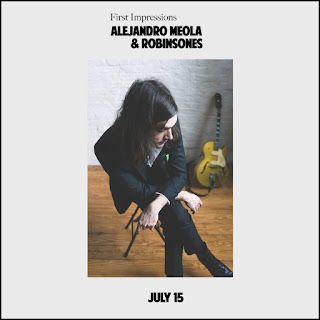 Calming things down a little and next up Alejandro Meola & Robinsones. with some background on them and also the featured number - “Gypsy Woman” is on his new EP, “First Impressions,” releasing to digital stores worldwide and in North America beginning July 15th.

Miami-born, Buenos Aires-bred, New York-based Meola filed two singles in the US in 2014 (“Please” and “Black Feathered Angels”).   He’s been making music between South and North America since 2007.  That includes 2 LPs and 2 EPs before debuting in the US last year.

“First Impressions” is a record of his first impressions of  his new hometown of NYC. Witness the gorgeous skyline to surfline video for the single “Please” here.

“I could have called it “First Impressions of New York” easily…. It’s essentially the musical expression of this inner revolution I’ve experienced in the past couple of years since I first moved to New York from Buenos Aires. The people, the streets, the language, the bars, the food, the fashion, they are all imprinted in these new songs. Not mentioned once literarily in the lyrics but in the sound.  The sound is different. And by different I mean new,” says the Latin troubadour.

Aesthetically, “First Impressions” is a total departure from his previous work.  It’s five episodes according to the writer.  Each one very different from the other, but still connected by an overall sound. Super songwriting, arrangement and production courtesy of Meola, Francisco Botero’s engineering for Studio G Greenpoint and Steve Fallone’s mastering for Sterling Sound contribute along with his band, Robinsones, to Meola’s professed “eclectic 25 minute rock ‘n’ roll  voyage.”

My first impressions are of a stripped back indie rock feel, with quality musicianship and some catchy songs. Check the featured song, if you like, then the EP is a must have. 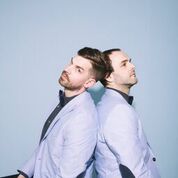 New for me are Twin Within and apologies if I am a little late to the show. Background is - The group consists of Steve McKay and Alex Samaras. McKay mainly known as the percussive force behind Bruce Peninsula, collaborate with Timber Timbre, and songwriting partner of Allie X, while Samaras background is in Tuvan throat singing and working in countless vocal ensembles.

Merging classic pop with classical sensibilities, in a uniquely modern way. Together their voices have a natural affinity beyond technical ability, and recall classic duos like Righteous Brothers, Walker Brothers, or Simon & Garfunkel. Alex's vocals enhance the arrangements with the same depth and originality that an Owen Pallet string arrangement would, enhancing Steve's catchy, but intricate, Grizzly Bear like song writing. An anti-throwback throwback. With just a touch of yacht rock.

Yacht rock? Na come on hows a genre mix addict like me going to cope with that. Harmonies and oh so cool music are very spot on and we can throw in a wonderful as well. A hint of the classic Steely Dan precision to add to the name checking going on above. Warm sunny week off rock! 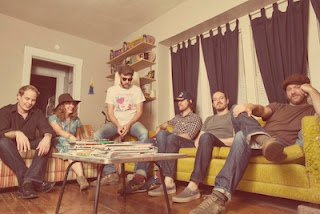 Next up - Telegraph Canyon. We are featuring their single from their upcoming LP, 'You From Before' due out on July 31st.

Loads of background - In 2010 the Fort Worth, TX based band, Telegraph Canyon released The Tide and The Current on Velvet Blue Music. Whatever the expectations were for the album, none anticipated the level of success The Tide and the Current enjoyed. Following the release of the LP the band’s Texas shows brought greater opportunities as the septet found themselves in front of larger and more diverse audiences. Telegraph Canyon’s regional fan base quickly expanded. Over the next two and a half years the band toured throughout the U.S. and Europe on the momentum of that surge, while their songs, praised by Rolling Stone as having “irresistible choruses,” appeared in multiple films and television shows. Now, five years removed from the release of their sophomore album, the band prepares to issue it’s follow-up, You From Before.

You From Before is an intensely personal record, and is, at times, uncomfortable in its intimacy. “Every song is about a person or a relationship I've had," says front man (singer/songwriter) Chris Johnson, "many of them women, some romantic, some not. The songs aren't all about breakups, but most of these people aren't in my life any more. Some of them were only there for a day or two but affected me in a huge way." Since the release of The Tide and the Current, Johnson’s life has had it’s share of obstacles. A difficult divorce, a period of homelessness, living in an RV in Fort Worth, various line-up changes in the band, and the pressure to avoid artistic redundancy, collectively forced Johnson to navigate through an unfamiliar emotional terrain.

Throughout the writing process, the impact of the impermanence of Johnson's daily life left him meditating often on death and the question of an afterlife. You From Before reflects the idea that some of us live several different lives on earth during the course of our life and wonders how that relates to what happens to us after we die. Themes of reinvention and reincarnation play throughout the album and culminate in a general attitude of perseverance. An attitude Johnson and the band have come to rely upon in their commitment to a lifestyle of creating and performing music together. The new songs are just like the last five years of Johnson's life, lively and moody, cinematic yet introspective, and filled with the magic of uncertainty.

I can add that NPR & Rolling Stone have picked up on this band and the featured song below suggests why. Without wanting to state the obvious this is classy music with those 'play again' hooks everywhere. Album now on the 'must have' list. 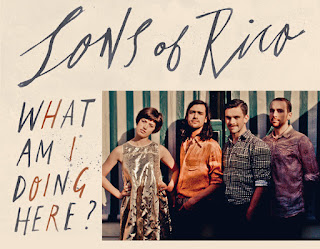 Sons Of Rico finish this round up in style, first some background - Melbourne indie rock quartet Sons of Rico are back with a brand new single, 'What Am I Doing Here?'. "It's the question we ask ourselves in moments of discomfort, loneliness, or dissatisfaction, and the confidence it can take to address it." - says Alex MacRae. The song is the first taste from the band's forthcoming third album, and the follow up to 2013's colourful 'In Rico Glaciers' that spawned singles 'You Don't Know What You're Missin' and 'I'm Not Thinkin' About You'.

The song is introduced in a manner that may have one thinking the band has travelled back to the 80s. What are they doing here? Electronic drum samples, swelling Toto-inspired synths, and Belle and Sebastian-esque vocal deliveries from frontman Alex MacRae and keyboardist Siobhan McGinnity seem to pave an entirely new direction for the band. However, we're instantly snapped out of the calm when Adam Weston's (Birds Of Tokyo) guest appearance on drums thunders in and the song confidently charges ahead, gaining momentum with every section -- keeping your ears on their toes.

Recorded in their new digs of Melbourne at Newmarket Studios, Sons of Rico were thrilled to have local hero Callum Barter (Dorsal Fins, British India) behind the desk engineering MacRae's vision.
Sons of Rico launched out of Perth in 2010 with the single 'This Madness' from their debut album 'Reactions'. In 2012, MacRae and Weston relocated to Brisbane to record the band's sophomore album 'In Rico Glaciers' with legendary producer Magoo. Shortly thereafter MacRae relocated to band's current home of Melbourne enlisting new members Terry Mann (Coach Bombay), Siobhan McGinnity, and Nigel Moyes (Money For Rope).

This is a tonic for anyone struggling to smile or in need of a lift. Harmonies and a lively soundtrack that say 'come on - it's summer'. If this don't work it's time for one of those positive life changing sessions.