This is a fine EP. There may only be two of them however they have an expansive sound on some songs. It's also hard to try an pin them into one genre, a mixture of indie pop and folk with a hint of singer songwriter thrown in for good measure. There is a mature feel to the lyrics and the production is spot on. Facebook (here). 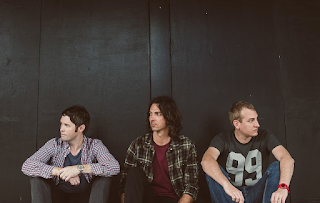 Binary Circus - Background - Binary Circus have brewed up something special with the upcoming release of their latest single ‘Storm’ on the 7th of August 2015. The three piece from Brisbane have been writing up a storm with a new found enthusiasm and direction after settling on a more ‘mature’ sound. Infusing a subtle blues layer to their existing grunge/rock has given the band some breathing space with their song writing, evolving into a more relaxed version of the band.

Recorded at Luna Audio Studios on the Gold Coast, ‘Storm’ in its earliest incarnation was written on a black, toy grand piano in the bedroom of singer/guitarist John’s daughter. Rock’ n Roll! The song then evolved as a collective process between John, brother Darryl Fink (bass) and Greg Birrell (drums) into its final form.

“After writing the main riff, the chorus, melody and lyrics all came together with in the space of a few days which never happens to me. When we rehearsed it as a band it all came together very organically which I guess is where it gets its laid back vibe”. John Fink, singer/guitarist. From start to finish ‘Storm’ builds in energy and purpose, ending in a climactic wall of sound. An alluring song coupled with at times dark lyrics like “natural progression’s not paying attention to what it is letting through”, ‘Storm’ is a testament to the new direction to which Binary Circus have chosen to explore.

This is the only track I have heard from Binary Circus and it's an impressive song. There is a lot stated about the song in the promo words above, I would add that describing this as a mature sound is really appropriate, it's a good one with a bluesy rock feel and some! Facebook (here).

Copywrite - And we are told - This video is leading into our upcoming album entitled "A Heart of Glass" out August 11th!

None of this record was recorded in a studio. All of this record was only recorded at our own houses in Australia, with our shared collection of audio gear and microphones. We started the record when we were 16, and it was completed a year after high school. The record is extremely personal to us, truly our "high school" record. Occasionally making us cringe in it's pure honesty.

"Philophobia" is a taboo but common fear of love. I found it interesting that it was always about the pain after the relationship, as I had always feared about losing myself to the point it would have to hurt. It seemed everyone who fell in love that I knew completely changed; almost accepting less of themselves and abandoning their ambitions, dying off to simply having a love of their life which I knew was so naive at such an age.

I have to say if you like the music video below the album will please you even more. There is a 'sense of freedom' in the songs that I think comes from not being in a formal recording studio environment. The production is very good, the variety encouraging and the raw energy a delight. Facebook (here). 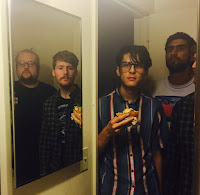 Media Jeweler - Background - Media Jeweler arose as a veritable phoenix out of the ashes of a revolving-door big band following an unexpected but celebratory funeral pyre supporting A Hawk and A Hacksaw in LA. Calls were made and within two weeks a leaner and decidedly meaner entity emerged, outlook fresh.

Two years later, their debut albumaims to capture the relentless restlessness of being alive on this increasingly weird and overstimulating planet. It was recorded and mixed in a casual and really quite nice three-day session during the dawn of spring at Machines with Magnets by Seth Manchester and Keith Souza (Battles, Lightning Bolt, etc.). It was mastered a week later by XOQ (Liars, Factory Floor, Martin Gore, etc.) The mood varies drastically on each of the seven tracks that make up the narrative of the album. We celebrated its completion with a few dozen jello shots at the local watering hole where we witnessed a man with a voice like crushed charcoal yell and storm out while Kid Rock's deepest cuts droned.

Please note that Media Jeweler prefers to be referred to as a Rock Band full-stop, jubilantly taking into consideration all the trappings and tropes associated with Rock music. The nuance lost with the variety of modifying adjectives that can precede "Rock" is priceless.

There is a free form swagger to this song and the sense of marching forward as the song builds. Nonconformist however very appealing is the first thought that went through my mind. I think they can comfortably be referred to as a rock band, one with a uniqueness that pleases. Website (here).

The Woolen Men - Background - The Woolen Men are three - two Oregon natives and a Washingtonian.  They play punk influenced DIY music in the Pac-NW tradition of Dead Moon and the Wipers.  More than a sound or style, that means a kind of work ethic - do-it-yourself and do it a lot.  The band is happiest touring up and down the I-5 or bunkered in their practise space with the cassette 4-track rolling.  And it shows.  Live, the band is thunderous and energetic and the magnetic chemistry of the three of them playing together shines through in the recordings. This week the band announces their sophomore album Temporary Monument on Woodsist Records, due September 4th.

The Woolen Men are Alex Geddes, Lawton Browning and Raf Spielman.  They live and work in Portland, OR.  Raf previously released an album of solo material under his Polyps moniker for Woodsist's sister label Hello Sunshine.

From the band: "Our hometown has been buried under an avalanche of condos and pointless businesses catering to the newly rich. Noise complaints shut down our shows and pull the plug on countless DIY venues. The places where we lived are being torn down; the rent keeps climbing up. Born too soon or too late, the recession's effect on our youth was as invisible as it it was profound.

Music today is rendered powerless - white noise made in the echo chamber, for the great Smooth Face that gazes once and moves on. So here it comes, some noise from the dustbin. The Internet is sham: Temporary Monument, we made it for ourselves. Look us in the eyes and tell us you're not getting old."

'After The Flood' is the first song I have heard by The Woolen Men and boy does it make me want to hear more. The pay off from touring and experimenting and recording is a fine, fine song from what is now for me, an eagerly awaited album. Facebook (here).