Turk Tresize - Album - If It Is To Be 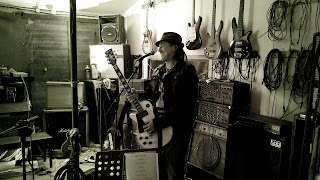 Turk Tresize - If It Is To Be - The album that nearly got away...

Well the bio has this to say - Turk Tresize is the embodiment of dusty backroads, Australian rock ‘n’ roll. Turk’s music drifts through the best decades of Rock ‘n’ Roll and takes his listeners on a story-telling trip through time.

Raised on his family’s farm in Cannons Creek, Victoria, Australia, Turk is a music man that has embraced the hand that life has dealt him. Turk has managed to perform music across the globe, operate a successful annual music festival and launch a record label that released his highly-touted debut album, Soul Casino. He has accomplished this while fighting a deep-rooted battle for the family’s land. Turk continues to tell his intriguing story in the form of song with his sophomore album, If It Is to Be.

‘If It Is to Be’ draws attention to Turk’s rock roots while sharing stories of hard-won lessons he learned while growing up. The album takes you on a musical journey. It is a classic rock album with sounds varying from a 60’s and 70’s Led Zeppelin and Pink Floyd vibe with songs such as “Whole Lotta Crazy” and “Too Much”.  Songs such as “Lipso” combine Doo-wop stylings with alternative rock sounds. The song “Car Park” stands out on its own as a political anthem and “has a real tongue-in-cheek, jam it up your ass, feel to it, which I like,” says Turk.

The ultimate driving force behind ‘If It Is to Be’ lies in the track “Sweet Monica,” a tribute to Turk’s mother who lost her battle with Multiple Sclerosis with Turk by her side. The song gives listeners a glimpse into Turk’s heart with the lyrics “If it is to be, it’s up to me”, a motto Turk’s mother recited to him throughout his life. These words make up not only the inspiration for the album, but Turk’s entire life. “Life is what you make of it, and it is up to you to put the pieces together to live the life you are meant to live,” says Tresize.
= = = = = = = = = = = =

Somehow when I first received this album back in the middle of May, it slipped through the net. Some promoters bombard us with the same artist over and over and some just give us a gentle reminder, the latter tends to work for me. So when I was prompted today I was kicking myself that I had not picked up on this artist and album earlier. The pedigree of the production should have hit my radar - produced by Andrija Tokic (Alabama Shakes, Hurray For The Riff Raff, Benjamin Booker) mastered by John Baldwin (Sly Stone, Willy Nelson, Hurray For The Riff Raff).

'If It Is To Be' was released one month ago, and has a natural gritty roots feel, that takes Rock'n'roll and blues rock up a notch. Turk clearly loves his craft and immerses himself in both the lower key blues numbers and the heads down, full on rockers. His vocal range and passion really is the icing on the top. That this album deserves to be noticed way beyond the shores of Australia is the understatement of the year. If rock in any form is your passion, this is a must have - Website (here).