Quality Not Quantity: TIO - Babes are Wolves - The Sunday Reeds 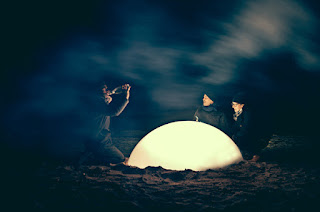 TIO - Through The Heavy Clouds.

There website tells us - TIO toil together and co-create in a honeycombed metal silo, hovering over an upturned and chard treasure chest of chords, lights and memories. Flittering stills of futures to come, love's decay and rebirth. The club becomes a mirror for everyone, and it shakes, sometimes slowly. They met outside of the city somewhere. A few years ago, wind whips the sand, glass, wires and light. TIO are from Toronto, Canada.

TIO make music from a self feeding wellspring of churning, purple and black waves which says; "you could sit there, or stand, but we are invoking THE invitation, and it is open, swaying and dropping. Movement and memory are the goal, together, lips like wine "

They also add - The noise of time is not sad. Time lingers and repeats through the camera. Captured and re-captured, played and re-played, we see each other through the lens of time. Two worlds, two cameras: Through the Heavy Clouds captures two lovers separated by space, but connected through images and fragments of the personal. Alone, yet together, we relive our lives through the eye of the camera. Fragments of time captured and relived, re-experienced, and re-imagined in the heart.

This. The latest single from TIO before October's release of the debut EP.

An atmospheric song with guitar and vocals drifting above the smooth backing track. Imaginative and very pleasing. 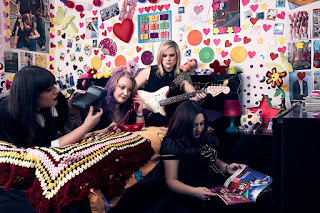 What we are told - Adelaide band Babes are Wolves are about to hit the airwaves with their debut single ‘Wait’, from the EP ‘You Only Live Twice’. They’ll be kicking off the release with a 90’s prom inspired launch at The Jade on the 16th of October.

Babes Are Wolves blend rock, grunge and dark pop styles into tunes that could sweep Sean Connery off his feet. They’ve shared stages with the likes of interstate acts Axe Girl, Captives, Hey, Lady! and Adelaide favourites Tony Font Show. Their debut EP is a wall of sound full of distortion and angsty vocal hooks.

The single ‘Wait’ comes from the debut EP, recorded at Capital Sound Studios and mixed, mastered and co- produced by Jimmy Balderston (Grenadiers, High Tension). The song is an atmospheric hook-driven track, with layers of guitar and rhythmic drum beats.

Drums drive this along, as guitars soar and moody vocals blend, to become a concise, no nonsense grungy rock song, that just pulls you in. 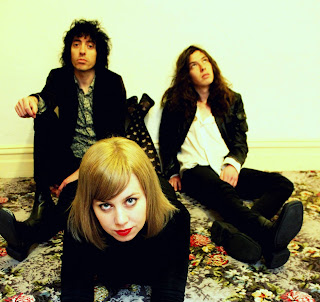 Their debut LP ‘Drowning in History, released through UK indie label Squirrel Records in 2009, led to an extensive European tour in 2010 which won the band a huge following but came at a cost. Then a couple, Romana and Drew split up in Paris, the City of Love, an experience that became the inspiration for their critically acclaimed EP ‘Amour Tragique’, a collection of five songs about love and loss.

Latest single ‘Pretty People’ written by Romana Ashton, produced by the band and mixed by James Aparicio (Spiritualized and Mute Records) offers an insight into the direction of the album that the duo are currently writing. On one level ‘Pretty People’ is about cliques and their sense of self-importance, and on another, is a caustic social commentary about our culture’s fascination with ‘the trivial’, celebrity, gossip and fame by proxy.

A video for the single will be released on the 12th of October to coincide with the official release of the track to the public. The Sunday Reeds will plan to tour Europe in 2016.

Doom pop it may be, with Siouxsie springing to mind, enough to engage my interest. As the song develops The Sunday Reeds clearly put their own stamp on the music, a fine song with a timeless feel to it.