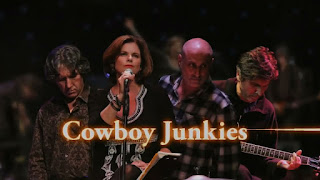 From the Internet Archive (IA), this is Cowboy Junkies live at the Commodore Ballroom, Vancouver, Canada, back on May 6th, 1996.

As many of you no doubt know Cowboy Junkies are a Canadian alternative country/blues/folk rock band. The group was formed in Toronto in 1985 by Margo Timmins (vocalist), Michael Timmins (songwriter, guitarist), Peter Timmins (drummer) and Alan Anton (bassist).

From Wikipedia - The Cowboy Junkies first performed publicly at the Beverley Tavern and other clubs in Toronto's Queen Street West, including The Rivoli. Their 1986 debut album, produced by Canadian producer Peter Moore, was the blues-inspired Whites Off Earth Now!!, recorded using an ambisonic microphone in the family garage.

The group's fame spread with their second album, The Trinity Session, recorded in 1987 at Toronto's Church of the Holy Trinity. Their sound, again using the ambisonic microphone, and their mix of blues, country, folk, rock and jazz earned them both critical attention and a cult following. The Los Angeles Times named the recording as one of the ten best albums of 1988.

The band was nominated for Group of the Year at the Juno Awards in 1990 and 1991. In the early 1990s Margo Timmins was named "one of the fifty most beautiful people in the world" by People Magazine. The group has continued to tour North America, Europe, Japan and Australia with extensive North American and European tours following album releases in 2002 and 2004. In 2008, they released Trinity Revisited in celebration of the 20th anniversary of the original recording of The Trinity Session.

A new 4CD release can be pre-ordered from the bands website (see website details below), this is what Cowboy Junkies have to say regarding this - In the 2000’s we released three studio albums, Open, One Soul Now and At The End Of Paths Taken. It was a turbulent decade in the geo-political sphere, a turbulent decade in the music biz and a turbulent decade in the lives of the four of us. We were all raising children and we all crossed the threshold in to middle age. Throughout it all we continued to make music and these pressures inexorably found their way in to that music. The box set Notes Falling Slow contains newly re-mastered versions of all three albums (Open, One Soul Now, At The End Of Paths Taken) as well as a fourth disc that contains newly recorded songs that were written during the making of the three albums.

The featured live recording from 1996 is highly rated for the audio quality, although as you can see below it's technical source remains debated.

Sound Quality: Very Good - audience matrix whilst some say soundboard or both.