Background promo - A Dead Forest Index has shared the second cut from their debut album In All That Drifts From Summit Down, out April 29th on Sargent House. “Myth Retraced” features guitar contributions from Gemma Thompson of Savages, resulting in a song that is both intense and beautiful.

Landscapes both seen and felt, real and imagined, lie at the heart of In All That Drifts From Summit Down, the vast debut full-length release from nomadic duo A Dead Forest Index. Comprised of brothers Adam Sherry (vocals/guitar) and Sam Sherry (drums/piano), the group crafts ethereal and intensely intimate compositions that defy trends and labelling, instead shaping an aural experience as organic as it is unpredictable. Forsaking instrumental complexity in favour of richly dense vocals and an otherwise minimal palette, the band evokes heaviness with the atmosphere they create rather than through blunt force. Teaming-up with Sargent House on the heels of a recent European tour supporting label mate Chelsea Wolfe, A Dead Forest Index are poised to introduce their sound to a global audience in 2016.

A Dead Forest Index was initially the solo project of Adam Sherry, begun in 2008. By 2010, it had evolved into a collaboration, with Sam Sherry supplying percussive depth to his brother’s distinctively hymnal approach to vocals, itself characterised by cyclical harmonies and experiments with drone. Untethered by place (or, for that matter, era), they’ve spent the past few years developing their sound, touring extensively between 2012-2014, and issuing the EPs “Antique” and “Cast of Lines” in the process. The latter was released by Jehnny Beth of Savages’ Pop Noire label, a precursor to the collaborative Savages/A Dead Forest Index composition and performance titled “In What I’m Seeing; the Sun” for the Barbican’s Station to Station Festival in 2015.

In All That Drifts From Summit Down, their debut album, is a testimony to the sublime divinity of nature and the cold reality of time’s passage. Unfolding over 13 tracks, the album imagines natural phenomena as poetic metaphor for the human condition, the lyrics evoking stone, cold air, unyielding emptiness and erosion, while the enveloping warmth of Adam Sherry’s layered, choral vocals makes for an intriguing contrast.

We featured the band in early February, however, I just love this second song from the forthcoming album and could not resist giving them another share. The band are touring the USA from late April right through to June. Gemma Thompson's additional guitar contribution to this song adds just that little something extra, to a band who musically, already have a lot going for them. 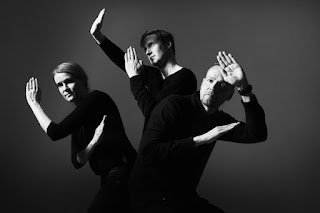 Red Sleeping Beauty formed in Stockholm in 1989 by singer Kristina Borg, singer/guitarist Niklas Angergård (Acid House Kings), guitarist Mikael Matsson (The Shermans), and bassist Carl-Johan Näsström. They made a huge impact on the international indiepop scene with two fantastic albums and a series of singles and EPs. Their first release was in 1992 with EP Pop Sounds (Marsh Marigold), followed by four 7"s all on different pop labels (Somersault, Motorway, Grimsey, and Sunday) before returning to Marsh-Marigold for the first full length Bedroom. They then signed to the legendary Siesta Records to release their fifth single Sick & Tired, their second album Soundtrack, and a compilation of singles.

Red Sleeping Beauty have always been fans of drum machines and vintage synthesiser. On ”Kristina” they’ve cultivated their love for electronic instruments and made up strict rules for the recordings: they only use analogue synthesisers and allow themselves to trim them with one acoustic guitar per song. The result is a heartfelt mix of memorable pop melodies and timeless electronica.

On ”Kristina” Red Sleeping Beauty is a duo consisting of vocalist Niklas Angergård and Mikael Matsson with help from Kristina Borg on vocals on four songs. The album title is a tribute to her.
- She’s had a tough struggle with cancer but things are looking brighter now. We expect her back as a full time member on the next album, the band states. ”Kristina” is the band’s first album in 19 year’s time. But that doesn’t mean the members have been disconnected from making music all these years. Niklas has released numerous albums with Acid House Kings on Labrador while Mikael Matsson has released several albums with both The Charade and The Shermans on Skipping Stones Records and Shelflife.

The return is by no means a temporary one. Red Sleeping Beauty is back for good. The writing and recording process has never been more inspiring and ”Kristina” is about ten times better than anything we’ve done in the past. You’ve only just seen the beginning of Red Sleeping Beauty 2.0, says singer Niklas Angergård.

'Mi Amor' has deep rich synth's that mix beautifully with the acoustic guitar and drums. Add to that the lush vocals and gentle melodies and you have a really good timeless piece of music. It bodes well for the album due out quite soon. 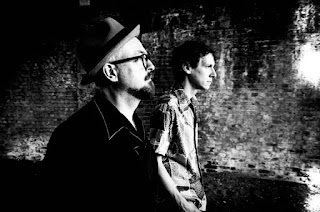 United Sounds of Joy - The Sun That Hides A Darker Star.

Almost two decades removed from each other’s musical energies, Vald and Sheehy have reunited to craft some heart-rending, mind-bending music. Coming on like Joe Meek and Goldfrapp entangled in some ancient machinery, the first listen track 'The Sun That Hides A Darker Star' is a magnificent, shimmering sound that the BBC’s Lauren Laverne described as: “If David Cronenberg directed a spaghetti western, we reckon it would feel a little like this.”

"Don't call it a reunion" insists Michael J Sheehy "…we're not even a band in the traditional fashion". Dream City Film Club were signed to Beggars Banquet within a year of forming in 1995, released an album and recorded two Peel sessions before Vald was unceremoniously kicked out. "Alex was dismissed because he was the only decent human being in the band", says Sheehy, "we were intent on dismantling the band from the off, everyone was pulling in different directions, each with his own very particular variety of personality disorder, drug abuse or mental illness, and if all that stuff hadn't of got us then I'm sure we would have buckled beneath the weight of our very lofty pretencions."

The album was released in the UK a short while back, with just one sold out release show. It's a refined and absorbing collection of songs, of which the featured track gives some idea of what to expect. The songs are consistently pleasing, ideas are imaginative and everything has the feel of delicate and careful construction, with the bands hearts close to the end piece.