Genres Mixed: Palumbo and the Funk - Broen - The Loom 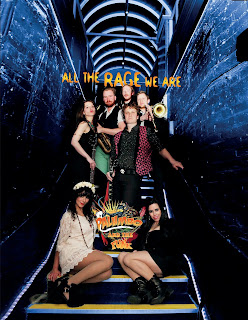 Palumbo and the Funk - Get It Right.

Background words - Boasting a line up from around the world Palumbo and the Funk have been regulars on the London scene with audiences loving their Rock/Funk vibe. BBC Introducing have been early champions along with Gary Crowley who described them as "a musical powerhouse".

Palumbo and the Funk  got a kick start in with their award winning self produced EP, Rock The Funk which won the Jazz/Funk/Fusion Category at the Independent Music Awards (IMAS) in 2014.

The title of their debut album “All The Rage We Are”, is a take on the famous jazz tune “All the things you are” and encapsulates a “funk rock sound” but the genre becomes more “rock with horns” with each track. Musically, it’s groove with sonic depth and you find more hooks each time you hear the tunes.Lyrically, there’s a story to tell in each song.

“All The Rage We Are”was 2 years in the making and features 10 instruments - Drums, bass, keys, guitar, tenor sax, alto sax, trumpet, 1 X lead vocal, 2 X BVs and was produced by Dion Palumbo and Alex Fletcher with input also from the renowned Richie Stevens (Boy George, Joss Stone, Gorillaz, George Clinton).
'
I missed this band last year when they released their album 'All The Rage We Are' however it's such a great listen that giving them a belated mention only seems fair. Featured track 'Get It Right' typifies the excellent music this band generates both in the studio and in their natural live environment. This is swaggering funk rock from the  London based funk rock collective formed in 2011 by guitarist, front man and Australian singer songwriter Dion "Blindman Jumbo" Palumbo. 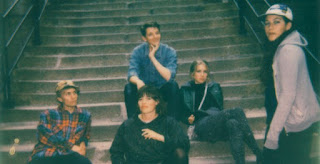 Background promo - It’s the dark side of ladies night – the heels, the dresses and alcohol-fuelled messes. Norwegian quintet Broen glam it up on latest offering ‘No, My God’, with vocalist Marianna Røe pondering post-club frivolities: “We bumping round like a party of T-Rexes, wearing tiny little freaky dresses”.

Beneath the track’s gleaming exterior lies a somewhat existential brood: “It’s about ignoring your problems, and drinking, partying and instagramming your problems away,” Røe explains. “And then getting lost in who's right, who's wrong and all the different voices that argue Which God could or should help… ‘No, MY God’.” The track captures Broen’s genre-clashing, gloriously indeterminate charm, serving a synth-illating instalment of Britpop, hip-hop and West African rhythms. Stream/embed ‘No, My God’ below...

‘No, My God’ is taken from the band’s forthcoming debut EP ‘Yoga’, released May 6th via London-based singles club 0E0E. The four-track EP includes acclaimed singles of last year ‘Iris’ and ‘Boy’ – earning the collective praise of The Guardian, Consequence of Sound, KEXP and BBC Radio 6 Music’s Lauren Laverne.

'No, My God' has a quirky marching beat around which swirl both instruments, vocals and melodic harmonies. The song disappears into some kind of hip hop spell, then the craziness resumes. It's fascinating and quite addictive. 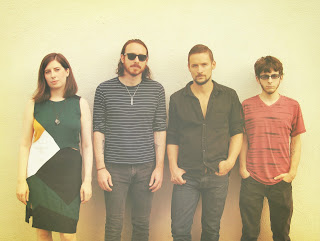 Background bio - The Loom – a band from Brooklyn that has been called a “Next Big Thing” by the New York Times, “Best of What’s Next” by Paste Magazine, and a “World Café Next” band by WXPN – will release their second album Here in the Deadlights on April 22nd via Crossbill/Stereocilia.

However, Here in the Deadlights is not the record they set out to make upon returning from touring their debut album in mid-2012 (they made that album too, but more on that later). Instead, Deadlights both reflects and was made in the midst of the extremely difficult time that unfolded for band leader John Fanning upon their return: a life upending split from his longtime partner and best friend of fourteen years, the nearly lost mind and period of psychic and existential searching that followed, and the heavy lifting of rebuilding it all out of that collapse.

These circumstances, combined with the band’s collective and long-percolating obsessions with repetition, groove, atmosphere, and dissonance, honed across several hundred shows throughout the US and Canada and as far away as Poland, informed the shape of the new record.

Deadlights was recorded with producer Kevin McMahon (Titus Andronicus, Real Estate) at Marcata Recording in upstate New York, and finds them digging more and more heavily into these inspirations, stacking organs on top of organs and undergirding endless tangles of words with noisy guitars, set against horns run through delay pedals, all while maintaining the spirit and craft that led Daytrotter to write that The Loom “makes us believe that they’re the fathers and mothers of our cold and jagged memories, those that may or may not even be our memories for they feel so distant.”

Driven by psych-influenced guitars, songs like “I Am Not Young” and “Fire Makes” push towards connection and against the incessant passing of time, while “Ten Thousand Tiny Field Mice” is the repetitive, bracing sound of a mind unraveling (complete with manic saxophone breakdown from Phantom Family Halo’s David Lackner, who plays on “Fire Makes” as well).

There is a considerable amount to discover within the forthcoming album. Across nine tracks the band dig deep with ideas and passion, resulting in something that is clearly quite special to them, and as importantly, for the listener. Vocally superb and musically inventive, the album reflects the circumstances of John Fanning to the point where his emotions are shared, almost on a one to one basis. In the days of singles, EP's and on-line streaming, The Loom remind us that whole albums remain a musical journey of art in there own right.