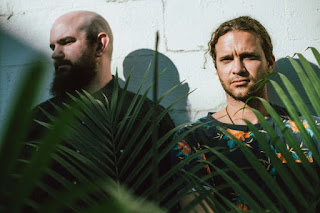 The Rival - My Own Devices.

Background promo - The Rival Unveils New Single; Announces EP. Nashville alt-rock duo The Rival has unveiled the first single, "My Own Devices," from its upcoming EP, Sands. "My Own Devices" was premiered by Substream Magazine which says the track is a, "...massive new jam..." and that Sands, "...offers huge indie rock anthems, catchy choruses, and softer, elegant moments strewn throughout. We can tell you confidently that it’s a release you’ll want to visit repeatedly this fall."

"My Own Devices" will be commercially released and available at all digital outlets on August 26. The Sands EP is slated for release on October 7.

The band wrote the track from the perspective of a, "...family member that has been through hell with their partner and it’s been difficult to watch. We wrote ‘My Own Devices’ by putting ourselves in their shoes, imagining what it must feel like to try and fix what is broken and get back to that sense of home. Musically, we wanted to pay tribute to some of the great ’90s albums we grew up with, from Jeff Buckley to Weezer, and experiment with a sound that felt like home to us."

Sands is the second in a trilogy of EP’s The Rival is releasing in 2016 and 2017. The first EP, Waves, featured an electronic, synth-heavy, sound that reflected an upbeat summer vibe. On Sands, the duo showcases some of the most raw and intense tracks Phillip LaRue and Allen Salmon have arranged together. Since forming in 2012, The Rival has seen incredible TV/Film success with its songs used in everything from Apple’s iPhone 5 launch, to commercials for Target, Nike, Sony, Microsoft, and ESPN. Individually, Phillip and Allen have numerous songwriting credits including Phillip’s #1 country hit “Whiskey In My Water” performed by Tyler Farr, plus Allen Salmon’s credits as a producer, mixer, and writer which includes collaborations with MuteMath, Fleurie, Katie Herzig, and Neulore among others.

It's not to surprising that an alt-rock duo will come across powerfully, there is usually far more distinction between the instruments for starters.  'My Own Devices' has that power, however you can add in melody an attention grabbing chorus and emotion within this song. The Sands EP sounds very promising. 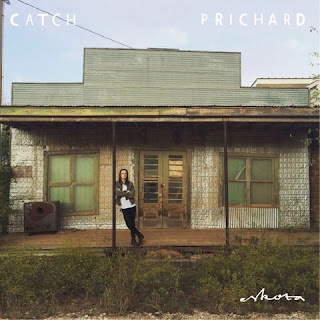 Background - Steeped in Americana, and with a voice that simultaneously conjures Anohni and Leonard Cohen, Catch Prichard is the work of Sawyer Gebauer. He spent several nomadic years living all over Europe and touring in support of his previous project Brittsommar, including stints in Sweden and a dilapidated warehouse in Berlin, before returning back to the US to work on the Eskota EP.

The entirety of the Eskota EP was laid down in one week within the walls of an abandoned grocery store… when he and engineer Brad K. Dollar first arrived, the building was overrun with wasps, and rattlesnake skins littered the floorboards. In time, the space was reclaimed, night fell, and recording began. Sawyer set out to record a collection of sweet and simple songs that exalt narrative as much as they do melody.

The result is Eskota, a five song EP resting somewhere between languid folk and forlorn country, with Sawyer’s weighty baritone gliding over pedal steel and Moog like an oil slick on water. Eskota, like all of Sawyer's work, is a testament to change, but it is change that can be found closer to home.

Beyond the delicate folk/country acoustic music, the first thing that grabbed my attention on this song are the deep and graceful vocals of Sawyer Gebauer. 'Eskota' is one of five Root's type songs and all of them in my opinion, absolutely demand you stop what your doing and listen. That a musician in a genre such as folk or country can continue to surprise or even amaze is quite something, I reckon Catch Prichard has just done that. 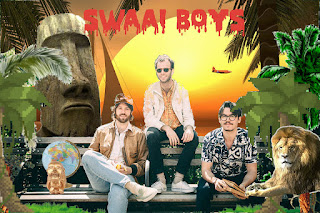 Background - Swaai Boys are proud to announce the newest crumbling desert pop single off their upcoming collection of songs Hot Sand! Dana Of Dendur is based on a love story from Swaai Boys' percussionist Helmut's youth. The Temple of Dendur is an intact Egyptian temple housed in the Sackler Wing of the Metropolitan Museum of Art, where a high school girlfriend of Helmut's had a summer internship. Her name was Dana. Helmut said she was tasked with categorising hundreds of shabtis in the galleries near the temple -- Egyptian Blue funerary figures -- which was apparently very boring and lonely.

The Swaai Boys were having a few mai tais at the museum's roof garden one summer afternoon when Helmut told his fellow Swaai Boys about the affair -- Helmut would meet Dana at the end of her shift, they would cut the lines, sneak into the temple, throw pennies in the water, and make out under the palms.

Often staying until the museum closed, Helmut and Dana would wander the wing looking at Queen Nefertiti's jewelry and crumbling pharaoh sarcophagus's. At one point, Dana said she knew hieroglyphs, and tried to decipher the insanely long Book of the Dead papyrus which lines a corridor there. They were in paradise, but was all too good to be true. They drifted apart after the summer, and Dana left a fond hole in Helmut's heart. A few weeks later Helmut ran into Dana at an opening at the Hemingway Gallery on 55th Street. She was quite cold and aloof to him. Her wealthy, stuffy parents had never liked Helmut, and she seemed to have grown into the mold.

Swaai Boys 'Dana Of Dendur' is about foiled young love -- how funny and sad it can be watching people grow up and change, sometimes in such a short amount of time. Especially astute in the shadow of a 2000-year old temple preserved immaculately under stippled glass that mimics its original Nubian lighting.

'Dana Of Dendur' is three minutes of bliss. If the story line above doesn't get you, the song should do. The band are members of the renowned Explorers Club, and if their explorations create songs like this, then keep on exploring and charming us please!

Background - Magic Trick shares two new tracks from new LP. And it’s a wide variety of shapes you’ll find on this album. Take this less as a conscious display of versatility (although it does demonstrate Cohen & Co.’s ability to shape-shift) and more as a result of the freewheeling, haphazard recording environment described above. A ghostly choir of female voices open the album like a seance. And the spirit they conjure proceeds to flit about over the course of the ensuing ten tracks, animating various stylistic forms, from the baroque pop of “Forest of Kates” to the icy post-punk of “I Held the Ring.” There’s the air-tight R&B groove of “Startling Chimes,” the krauty “Purest Thing,” a jammy side-to-side trot that moves “First Thought” along, taking a detour into country before culminating in a glorious Grateful Dead indebted coda. But throughout, it’s Tim’s lyrics that are pushed to the front of the mix. This album is a display of solid songwriting – collectively fleshed out, but from Tim’s composition book, and with Tim’s lyrics about family and about himself. These songs are the sound of his friends helping him suss through the conflicts of his new dual existence as father and musician, between old self and new.

Magic Trick’s 2013 offering, River of Souls, opens with Cohen asking, “Should we live from the mirrors other side?” Maybe, what you have here on Other Man’s Blues is an attempt to do just that. You can hear that his scope is widening, is being forced to widen by his circumstance. These songs are full of empathy. They reckon with notions of sacrifice and devotion, acknowledge the “winds of desire” and admit that “musings come from below” like a force of nature. Our protagonist is mid-transformation or maybe even pre-transformation. He is able to “regard his gruesome self” only because he is becoming a new man. Both sides are present. Which is the Other Man? Who is Tim Cohen? What is this magic he is trying pull off? Is it a trick? Or true sorcery? Either way, he must evolve.

'Forest Of Kates' is our second song feature for Magic Trick from the forthcoming album and it's another really fine song. Full of melody, exquisite harmonies and beautiful vibes, it compares well with the other track release First Thought which you can also check out Here. The album is eagerly awaited. 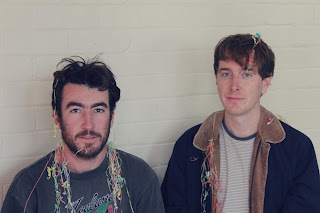 Unity Floors - Give and Take.

Background - Mates for a decade Gus Hunt and Henry Gosling have made themselves a strong part of Sydney’s DIY scene as Unity Floors. Their ability to create such a racket performing modestly on guitar and drums, has gained them respect in the scene and make them welcome regulars stages across Australia.

Their commentary of the banal happenings as twenty something’s comes naturally to the pair, their music like a noisy catch-up between old mates. Having never lended their talents to other bands, Unity Floors’ sound has natural fluidity, delivered fast with genuine familiarity and honesty. Their unique set up and ability to create vastly accessible, skuzzy garage tunes has gained them a loyal fanbase over the years.

Their debut LP, Exotic Goldfish Blues (Popfrenzy Records 2013) received great commendation from press and radio and even, surprisingly a feature in The Inbetweeners Two film with their hit single “Nice Fit”. In 2016, the Sydney favourites returned to the studio to record their new album with producer Nick Franklin. Life Admin is the result and once again it showcases the boys’ ability to belt out one great honest and crappy tune after another. 'Life Admin' is released on Friday 23rd September on Popfrenzy Records.

Another powerful duo Unity Floors song 'Give and Take' has a back to basics feel to it, cutting out everything but guitar, drums and vocals and creating some very decent indie rock. It's highly likable as is the video.