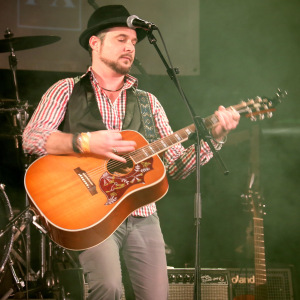 Steve Young - Home for the Summer.

Background bio - The world has been the musical home for singer/songwriter Steve Young, these past years, its length and breadth travelled as his talents as a session guitarist were sought and embraced by a host of popular artists. Recently though, it has been his own magnetic fusion of acoustic pop and alternative country which has been drawing attention and acclaim across the globe with increasing success.

Steve began his musical career with a London based rock band, which took him around the UK through several national tours. From there his string craft saw him play with the likes of Lionel Richie, Peter Andre, Gareth Gates, Delta Goodrem. In 2007, Steve was invited to become the touring guitarist for Darren Hayes, the former Savage Garden front man; a job that took him from The Royal Albert Hall and Wembley Arena to Sydney State Theatre, across Europe, Canada, the USA, Australia as well as a host of TV & Radio performances including BBC Radio 2’s Terry Wogan & Jo Whiley.

Steve Young is creating a stir all of his own now, and in a landscape calling out for something fresh to immerse in, his music is a tonic growing in popularity and vocal acclaim by the day. After a successful run of gigs supporting Nashville Country Star (and daughter of June Carter / Johnny Cash) Carlene Carter, acclaimed Blues Singer Jo Harman, sold out support gigs for Ramin Karimloo at the Union Chapel & Islington Assembly Halls in Jan and another sold out show for Time Out London’s ‘Rising Stars of UK Country‘ at 229 The Venue in March – 2016 most definitely started with a ‘Bang’.

As autumn draws closer, Steve announces 'Anyplace, anytime, you choose! Tour' Why…. Do I have to choose when you hear me live? Why can’t you? Who says it has to be your local venue, why can’t it be at your place of work? your favourite coffee shop? a local bookstore or even your front room? All I need is a guitar and a space to stand – you do the rest! I want to set a record for the number of gigs preformed in three months (Oct, Nov, Dec). More (Here).

I featured Steve Young over on BeeVids a while back. 'Home for the Summer' really does show just how good his music is, its a delightful, breezy song, full of good time summer vibes. As for Steve's late autumn and early winter, it looks like he is going to be a very busy man, with his unique tour plans, find out more on his website (link above). Background - Gabrielle Portelli joined a choir and had her first television appearance at the age of 3. At the age of 9 she started taking individual voice lessons and competed in local singing competitions where she won first places and Grand Prix till the age of 13.

Gabrielle represented Malta abroad and won the best voice award in Romania in 2013 and first place and third overall in Macedonia in 2011. She joined a classical singing choir where she performed in live concerts accompanied by the Malta Philharmonic Orchestra backing Joseph Calleja and Hayley Westenra among others.

In 2013, Gabrielle sang as a soloist with the Malta Youth Orchestra. In 2014 she was awarded by the ABRSM board of examinations for obtaining the Highest Distinction result in singing. Since then, she obtained Distinctions in music theory, piano and musical theatre. Gabrielle performs regularly in towns with live bands and orchestras. Last December she had her first experience in an oratorio.

Passionate about opera, musical theatre and crossover, Gabrielle aspires to start performing in theatres as she pursues her studies at University and travel abroad.

I'm not sure what genre I would even attempt to put this intriguing song in. 'The Voice' could so easily be from a stage musical, and yet there are operatic overtones, and to mix things up even more, Celtic styles within the music. That Gabrielle Portelli has a classical voice and a beautiful one at that is a given, and the song is pretty special. I would love to hear her explore even more musical genres, but as a starting point, she has grabbed my attention, and I cannot wait to hear more.

Background - Country slackers The Glorious North aim to lead you into the beautiful darkness with songs about whiskey, woe, lost loves and loaded Lugers. Like the love children of Hank Williams and Dinosaur Jr, The Glorious North mix tremolo, twang and temerity to fashion swaggering country rock that will make you wanna cheer, cry and puke into your Stetson . . . possibly all at the same time. If you like your country music dark and a bit dog-eared, then it's time you got the glory with The Glorious North.

Welcome to the Glorious North is the Melbourne four-piece's debut album. Following up last year's EP Dang!, Welcome to the Glorious North mixes early Paul Kelly with Creedence Clearwater Revival to fashion a sound that is supercharged country pop. The opening track, ‘No Soul to Save’, sets the lyrical tone with a tale of love gone wrong on the outlaw fringe, complete with a chain-gang choir's "oohs" and "aahs".

The album was recorded and produced by Dave Rogers (Ben Lee Band) at The Channel Studio, Melbourne Arts Centre. Warm valve amps and even warmer guitars shape the sound, with fiddle, harmonica, Hammond organ and mariachi trumpet adding to a soundscape that swells and shrinks like like the tide of a river (with bodies dumped in it, of course). Being ensconced in the Melbourne pub scene since 2014, The Glorious North are adept at adapting their live sound without straying from their slacker country style -- the gents are as at home in the intimate acoustic surrounds of the Gem Bar & Grill as they are fully amped up in front of 5,000 juiced-up punters at Brisbane's Beer InCider Festival.

'Strange New World' is a mixture of country rock and Americana, so much so, that I had to double check the band are from Melbourne as I am writing this. There are twelve glorious (pun intended) songs on the new album 'Welcome To The Glorious North' and there is not one that lets the collection down. If this type of music is your thing give them a thorough check, there is something really cool going on here. 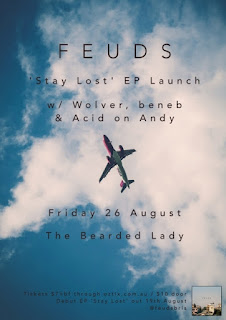 Background - Brisbane band Feuds today release their debut EP Stay Lost, which they will launch at Brisbane's The Bearded Lady on Thursday Aug 26.

Stay Lost was recorded largely at guitarist Perry Walker's farm in Noosa over what was supposed to be just one week. But the band found that the freedom of working outside a studio was the perfect nurturing environment to hone their sound, and the EP ended up taking the better part of a year to complete.

The result? An impactful and honest exploration of life - and all the uncertainties it brings. Says frontman Jeremy Hunter, "None of the songs resolve in a lyrical way, they just ask questions, or pose difficult realities, and refuse to give closure on them. That’s sort of the meaning behind the EP title Stay Lost - sometimes you have no choice but to remain confused. But the title is also a suggestion, in that you can choose to live with uncertainty, you can choose to be lost, and that might be a good thing. Nobody is more dead inside than someone who thinks they know everything; they’ve stopped growing."

Feuds is the reinvigoration of a project that's existed for some time now. Having previously performed alongside Holy Holy, Bad//Dreems, The Belligerents and Harts, the band now have the perfect setup to start afresh and launch their new vision. The release of Stay Lost threatens a formidable force in Feuds, and it's only the beginning.

With a jangly guitar sound and easy vocals the song 'River Of Wine' waits until the first chorus before it explodes into a more rock based track. It's less reliant on riff's and more on energy and melody, and it works.